The History of the Striptease.... 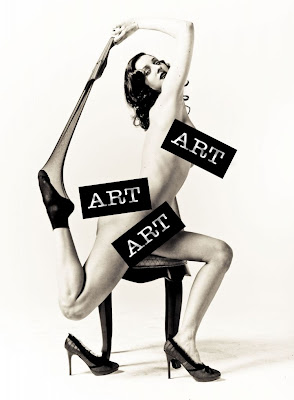 The word striptease has immensely evolved since its original conception. As I'm certain you could guess. The whole purpose behind the "original" striptease was to evoke a physical response (one that also led to the hand going into the pocket. And no, not for THAT but to fetch money). Evoking a physical response from men doesn't really take much. A bit of ankle. A bit of an arm. Ah, yes. Days gone by. Then the men expected more. Much, much more. And women, in the name of money were more than happy to oblige. Of course this means that the form of the striptease not only evolved, but the men themselves (for better or worse? Hm....). Maybe I should commence this little topic from the beginning, yes?

There seems to be no definitive answer to this, but the word itself did not begin to see use until the 1920's. Though it did existed earlier,but was simply known as something else. Most history points toward the theatrical venue known as the burlesque. Which means the term striptease and burlesque became fused together during the 1920's. And though we think of can-can girls and so on when it comes to the history of burlesque, you'll be surprised to find that the origination of the striptease itself is rather an American product coming from popular theatre in the 1860's. So while jolly old England became all the more staunch under the rule of Queen Victoria, America was embracing the wild west from coast to coast, saloons and all.

Of course, with a bit of reserve for all those Puritans as we American folks never jump head first into anything without dipping our toes into the water several times. To see if the temperature really is what we think it is. For Americans still wanted to keep the idea of a woman contained. After all, if an ankle could cause a man to hand over his horse and carriage, the thigh could only cause him to hand over the house and children. Heaven forbid! So all sorts of tricks were devised to draw men into watching these "burlesque" shows under the guise of "entertainment." Things such as full body stockings known as "fleshlings" started making appearances. Simply think of over sized pantyhose pulled over the length of a corseted body that came in shocking colors of flesh or white. All giving the illusion that the man was watching nude women prance about the stage when in fact they were very well clothed. Of course giving men a bit too much entertainment always has given the government cause to get involved.

When women grew even more creative on stage (with the help of the male bosses offstage, of course) senate bills were promptly being proposed in the 1890's in an effort to hold back the inevitable. They tried to fine such performing women $5 to $100 for their involvement in burlesque. The crime? Horrid lewdness, of course. Never we mind fining all the blasted men that attended these venues...it was all Eve's fault to begin with, remember? As times changed, allowing more freedom on stage, so did the acts going into the 1920's. Fleshlings were tossed aside and fans and bubbles and birds were introduced as a substitute. Which of course is where we begin the striptease that we know of today. A woman steps out on stage covered in balloons and playfully pops one at a time as men yell out for her to keep right on popping. When the last balloon is done away with, that is when the men realize the fantasy is over and she is actually wearing tassels and a pair of underwear. I have to admit, however, that the bird act rather fascinates me. I love birds. I truly do. But to have them draped upon a body during an act could only lead to shitty results. Quite literally. Yet for some reason the men loved it and continued to love it up into the 1950's. The question is, how was it possible to train the birds to behave so that they fly off one by one? That is indeed an act to behold. I wonder, however, if there ever was a show in which all of the birds simply up and took off disappointing the whole audience with one go. In the end, however, I found that there really was no bounds when it came to the striptease once we found ourselves past the 1920's.

Underwear and tassels were about all that was left by the time the striptease was in full swing. And this may surprise you to no end, as it did me, but the striptease as we know it, disappeared in the 1950's. Pornography and strip joints took over, leaving nothing else to the imagination of a man and creating a whole new generation. So saying all that I have, I happily turn this over to you. I'm looking for a total of 10 responses before I give my own. Do you know the difference between a strip joint and a striptease? A hint, it has nothing to do with the amount of clothing...
Posted by Delilah Marvelle at 2:29 PM 9 comments: 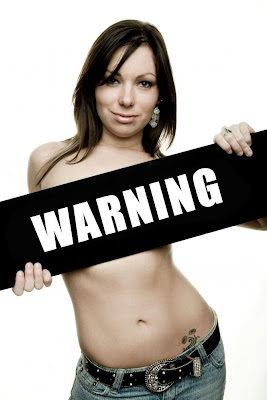 For those of you who haven't guessed by the wee little sign on the left, we are about to delve into some very naughty tid bits. If you are in any way offended by graphic sex or naughty language, I ask that you depart post haste. For I am not one to entertain prudes. Oh, and for future purposes, whenever you see this lovely gal holding up her little sign, do be well forewarned. Now. It seems both readers and writers alike give much discussion about sex and how they miss days gone by where romance involved mere kisses and the fluttering of hearts but absolutely no sex. Was there ever such a time? Truly? Which era could they possibly be referring to? Certainly not the 60's, 70's, 80's, 90's or now. For sex revolution spanned those eras with the force of a tornado. So do they mean earlier? And how much earlier? Knight in shining armor earlier? Or flapper earlier? Now I certainly understand the need for romance. I believe it in with all my heart. But true romance cannot be romance without sex in one form or another. For those of you who have never peeked into the dictionary, I am about to entertain you with something rather shocking. Romance as defined in the dictionary is as such, "A novel or other prose narrative depicting heroic or marvelous deeds, pageantry, romantic exploits (Do remember, dear readers that exploits can be a good many thing left to the imagination), etc usually in a historical or imaginary setting." A moment of silence, please. Prepare yourself for the next definition. For if you go on through the entire list in the dictionary it actually gets fairly insulting to a romance author. And I quote from Webster's: "A baseless, made up story usually full of exaggeration or fanciful invention." Hey now, I beg to defer!!! Who wrote this smut of a definition anyway? Romance is hardly baseless nor exaggerated if done right. Which brings me to the point at hand. Sex in historical romances. Is it necessary? Some love it. Some hate it. I myself enjoy writing rather steamy love scenes. For they make the world of my hero and heroine real to me. They become made of flesh and blood and act as if they are made of flesh and blood. I doubt, however, anyone in days gone by can top the naughtiness of this creative writer.

"DOLMANCE - How I love to frig this huge prick on a virgin's clitoris! You, Chevalier, show me a good ass...Do I frig you well, libertine?...And you, Madame, do fuck me, fuck your slut...yes, I am she and wish to be...Eugenie, discharge my angel, yes, discharge!... Despite himself, Augustin fills me with his fuck...I receive the Chevalier's, mine goes to join him...I resist no more...Eugenie, wiggle your buttocks and grip my prick: I am going to jet a blazing fuck-stream deep into your entrails...Ah! fucking bugger of a God! I die! (He withdraws and the circle breaks) Behold, Madame, here's your little libertine full of fuck again; the entrance to her cunt is soaked with it; frig her, vigorously smite her clitoris all wet with sperm: 'tis one of the most delicious things that may be done."
Ehm. Now who would dare write such shocking things? Well, a hint. It was written in 1788. And you thought writers of erotica today were naughty. If people put it into context, well, today's erotica can be pretty clean in comparison. I agree that people have different tastes in sensuality but the reality is there is no such thing as "back in the day." It is an illusion. Because if your parents weren't having sex, you wouldn't be here to read this, you silly thing you. Sex was simply done more behind closed doors. And allow me to step outside my bounds and say that the pages of a book is a door you open. It is the author's discretion, however, as to how wide that door should be opened. Bottom line, the whole concept that people in history were prudes and dared not print or engage in such naughty behavior is something Puritans here in the States have tried to established. No offense to the Puritans of course. So. Can anyone guess who wrote the above? And no, you cannot Google this! I shall post the answer to the question after I receive about 10 tries. Which means if less than 10 people post, we shall never truly know the answer to this dirty little question....(unless of course you Google it...) Happy April Fool's.
Posted by Delilah Marvelle at 8:20 AM 13 comments:
Newer Posts Older Posts Home
Subscribe to: Posts (Atom)