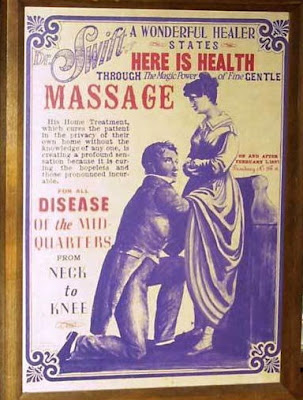 Since the 1700's, doctors all across Europe were frantically treating a female condition known as "hysteria."  It was a diagnosis created by medical men that covered all sort of outrageous symptoms from asthma, muscle spasms, headaches, depression, faintness, loss of appetite and my favorite, "a tendency to cause trouble."  What was the cause of "Hysteria" in women?  Not having been properly pleasured, of course!  Meaning...lack of orgasm.

The truth is, many of the doctors saw it as a tedious chore.  They had to finger women all morning and all afternoon, day after day.  Which created sore wrists and sore fingers.  (I kid you not.  Kind of like carpal tunnel).  Though dildos were prescribed to patients, and were used on said patients since the 1700's, it still required a lot of work.  Pleasuring women day in and day out in their offices was incredibly exhausting.  So...when late-Victorian technology offered mechanical solutions, you had better believe doctors jumped at it (making women even all the more happier, I'm sure).

One of the first vibrators was a "steam-powered device" called the "Manipulator."  And of all things it was created by an American physician named George Taylor.  It was hard to handle and created other wrist issues for doctors, lending doctors to look into creating something more efficient.
Step in Doctor Joseph Mortimer Granville (whom the movie Hysteria is based off) in the 1880's.  Dr. Granville created what was known as the first "electromechanical vibrator".  Before you knew it,
his device and many other large massagers became the fashion in many medical offices, that provided quicker and assured "paroxysms" to the large quantity of women walking through their doors day in and day out.   Eventually, more compact vibrators were created and sold directly to the public.  In the early 1900's, countless ads started appearing in female catalogs.

And there you have it.  Because men were shitty in bed, women had to go to their doctors.  Heh.
SO....for a chance to win a copy of the DVD Hysteria, answer the following question:  If you were living in 1880, would YOU go to your doctor for treatment?  Why?  Or why not?  The more creative the answer, the better your chances of winning.  Winners will be announced by Oct.28th and posted here on the blog.  US entries only.

Until next time,
Cheers and much love,
Delilah Marvelle