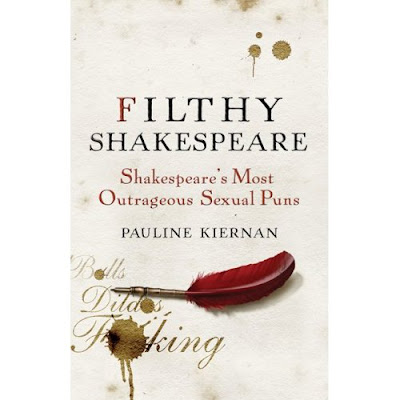 My dearest Readers,
The winds are changing. With Maggie now gone, I intend to only keep my posts to the first of the month as I wish to give you quality over quantity. I know you will all understand. And if you don't...well, go get yourself a dildo and make yourself happy. That said, I give thee the latest post on how Filthy Shakespeare *REALLY* was. Being an English major, and having been exposed (pun intended) to Shakespeare repeatedly, I noticed a pattern within his works. A naughty pattern. When I approached my professor to ask about it, he scoffed at the notion that Shakespeare was a dirty minded bastard. He said it was just his humor. I begged to differ.

Shakespeare for his time was probably outrageous and until I came across the book Filthy Shakespeare by Pauline Kiernan I forgot about how filthy he really was. Because there is no way I could ever do justice to how amazing this book is put together, I suggest you a.) go get it or b.)come back next month where I will be hosting a part 2 to this discussion. If you do both, I'll be impressed.

So...not many know that not that far away from the Globe Theatre where many of Shakespeare's famous plays were put on was a brothel. And not just one, but too many to count. It was known as the "London Bankside." Bank = brothel. A transaction that takes place between man and whore. Many of them competed with each other by naming themselves after genitalia. "The Cardinal's Hat" for instance, referred to an erection. Many may not have gotten that out of the name of the shop, but back then, a lot of the slangs they used to talk about sex were wildly different. For instance, "noon" meant what it means today, but it also referred to an erection, pointing up at twelve on the dial. Shakespeare being as witty and brilliant as he was, used his words as any great writer word to create a world of double entendres. Which to me says he most likely was indeed a man. Heh. Unlike now, people then really paid attention to the sort of words being said in a play. So those words needed to hold the attention of their audience unlike a television ever could.

Here's the thing about Shakespeare, however, that many people don't realize. It wasn't until after Shakespeare's death that the cleaning out of his plays started to occur (sadly, it happened to a lot of works in history). At first it was a word here and a word there, a pun here and a pun there, taken out one by one. To top it off, a lot of vocabulary has since then changed. Among the filthiest lines censored was actually from Romeo and Juliet. Mercutio insults Rosaline. And I quote: "O Romeo, that she were, O that she were/an open-arse and thou a popp'rin'pear." Basically, bend over and take her kind of thing. As quotes from Filthy Shakespeare (and I knew this...): "O = vagina, popp'rin = pop her in." One edition of this being seen was where "open-arse" was replaced with "Open Et Caitera" (snort) and other would simply insert a dash where the arse should have been. 18th century editors quite literally threw out lines and lines and lines of Shakespeare's work. As a writer, I cringe. Because then everything gets taken out of context. The voice is lost. The idea is lost. No matter how dirty that voice or idea was. Because Shakespeare also wrote poems in which men addressed other men in love sonnets (as Elizabethans were really quite open about their sexuality), 'he' was changed to 'she.' And I could go on and on. Bottom line, try to find (and they are out there) an UNEDITED version of Shakespeare. And use the book Filthy Shakespeare as your guide to pull out the puns on sex, buggery, whores, pimps, dildos, nuns, the pox, and so forth. It really is too much fun. I wish my professor would have put on this class. It would have been filled within the hour. Part 2 of this post will be posted (and I promise) on the first of the next month. Until then, be as naughty and filthy as Shakespeare. It's called being creative.
Cheers and much love,
Delilah Marvelle
Posted by Delilah Marvelle at 11:28 AM 4 comments:
Newer Posts Older Posts Home
Subscribe to: Posts (Atom)