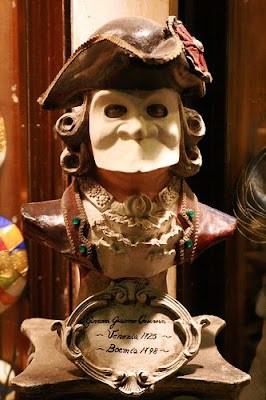 My dearest Readers,
This Part 3 will finish the mini series pertaining to Casanova. Though I gave you glimpses, I highly recommend you consider reading his memoirs. He went a little crazy (wrote freakin volumes and volumes...) but the stories the man has to tell were amazing and naughty, naughty, naughty. VERY well worth the read. Wicked grin. That said, let us jump right in and finish his sweeping history with a grand bow.

The above mask you see is taken from a museum in Venice which Casanova himself graced during his lifetime. Oh, to have worn the same mask as he and to have peered through those eyes! As Casanova grew older, his adventures slowly dwindled (most likely because his looks were fading and the cock wasn't what it used to be...). But to the very end, he never quite felt at home anywhere or felt as if he could rest in any one lady's arms. Throughout his lifetime he had done everything a man could ever hope (and things men usually avoid). He bed hundreds of women, dined with the finest and the lowest, fought several duels (and lived to tell about it each time), suffered from 11 venereal diseases (including gonorrhoea, soft chancre, herpes, and syphilis...sexy, eh?), survived smallpox, epistaxis, pneumonia, gout, malaria (several times), was a priest (he should have stayed one...), a librarian, a chemist, a novelist, a military man, con-man, pimp, prisoner, dancer, cook, lottery organizer, lawyer, spy, mathematician, violinist, playwright, police agent, mining consultant, silk manufacturer, spoke several languages (the more he knew, the more he could romance, after all), had seen most of Europe...He truly had done and seen it all, which -- despite the diseases -- is why Casanova TO ME is my favorite historic male figure. He was anything but perfect, but he had humor, genius and knew how to listen to a woman (and not just for the sake of wanting to get some...)

But as he grew older, Casanova's body started feeling the rough life he had led. He was one to have always thought nothing, not even a venereal disease could keep him down (or his pants up). And he started longing gazing on days of old. Days when Prince de Ligne once wrote to him saying, "One is never old with your heart, your genius and your stomach."
In February 1798, he fell very ill when mercury treatments were obstructing his urinary tract (ouch...). Despite having never been close to family and that they had long passed on, he found that he had acquired many close friends (men and women alike) who all flocked to his side and assist as his deteriorating state. They would send him craw fish for craw fish soup, which was Casanova's favorite dish his whole life (in his memoirs he claims his mother had often craved it during pregnancy and he had acquired a taste for it long before he ever came into the world).

On On June 4th 1798, at the age of 73, he died. His last words were, "Almighty God, and you witnesses of my death, I have lived as a philosopher and die as a Christian."

In closing, instead of leaving it upon his death, I would like to give a playful wink to the man and end this post with a few of his own quotes that I feel represent this amazing, true Renaissance man.
"The same principle that forbids me to lie, does not allow me to tell the truth."
"I have concluded that my conduct has depended more on my character than on my mind, though I struggle between the two."
"I am writing MY LIFE to laugh at myself and am succeeding."

And so I bring an end to the incredibly naughty life of Casanova. If you haven't read his volumes MY LIFE, do so. It's one of my favorite historic collections.

Until next time, Much love,
Delilah Marvelle
Posted by Delilah Marvelle at 1:00 AM 9 comments:
Newer Posts Older Posts Home
Subscribe to: Posts (Atom)