The Art of Strangulation...for Pleasure 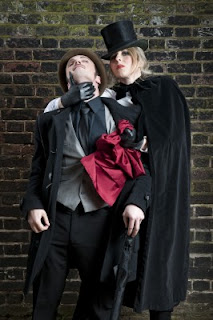 My dearest Readers,
Just when you think you know what I'm about to post...ha and ha.
The Art of Strangulation for Pleasure (known as erotic asphyxiation to us modern folks) goes back so far in history that most likely Adam and Eve were doing it in the Garden of Eden.  Heck.  Maybe that's why they got kicked out.  Supposedly, there was a Mayan statuette unearthed that had been found with a rope around its neck....and a hard on.  I about rubbed my hands together wanting to see THAT.  And while I've tried to dig up said statuette on the Internet as well as more information, alas, I haven't found anything of merit.  So I'm inclined to say that until someone can "erect" our Mayan, I can't give the rumor credit.  But it lends to the fascinating topic I intend to delve into.  That said....let's unearth what has, in fact, been historically recorded and substantiated.  Printed proof of strangulation for pleasure came to light in a most bizarre way and rather late in history.

A pamphlet published anonymously in England in 1791 surfaced in London society called Modern Propensities: Or, An Essay on the Art of Strangulation &c.  This pamphlet revealed a most astounding tale pertaining to a certain "Susannah Hill" and her trial which took place on the 12th of September of 1791 at the Old Bailey in London.  She was being charged for murder of a man by the Crown.  Usually, if the Crown is attached to it, it means that an example was sought to be publicly made.  Susannah was a prostitute.  Unlike other women who roamed the streets soliciting men, she was more of a "respectable" whore.  She rented out the front parlor of a home on Vine Street and had a little sign on the door that nudged the men of the public into knowing of her existence.  Signs like "Tender Care Within."  Let your imagination run wild.  With the sign up, she sat in the parlor waiting for customers.  One man, by the name of Francis Kotzwarra, walked in.

And this is where it gets fun.  She takes him into the backroom, expecting the usual, only to find the dude asking that she do him the honor of cutting off his genitals and slicing them in half as he watched.  She had sense enough to refuse.  So he "settled" on giving her money for a cord -- any cord -- that he might use to hang around his throat.  He explained to her that it would "raise his passions" and all he needed was few minutes.  She assisted him in getting the cord around his neck and he used the door to asphyxiate himself.  Upon finding the man stopped moving, she cut him down and darted over to a neighbor (a fellow prostitute), scared that she had killed him by submitting to his bizarre request.

And this is where the pamphlet darts down an unexpected road.  Apparently, it notes that the Judge of the proceedings halted any further testimony and told the jury that Susannah should be dismissed of all charges.  It just got too freaky for him.  The Crown (the Prosecution) had hoped to make an example of Susannah so as to discourage such "strangulation" for pleasure practices.  The Judge saw it differently.  He thought that Susannah was a victim of a customer who was too freaky to handle and that she shouldn't be held responsible for his freakiness.  Nor did the judge want the public getting any ideas that there was pleasure in strangulation.  So he had all records of the proceedings destroyed, hoping to keep the case silent.

Interestingly, no records of this case exist in the Old Bailey.  BUT....if we are to trust this pamphlet, it may very well be because the judge didn't want the case on record and had the recorded notes for the case destroyed, as mentioned.  Ah.  Which means...someone was glorious and devious enough, be it a jury member or someone in the back room observing, to take enough notes to make it public.  If this person hadn't done so, it would have disappeared from history.

Another interesting tid bit about the art of pleasure strangulation (and this you are SO gonna love) is that in Victorian era (according to source Uva), there were specialty places in London known as "Hanged Men's Clubs."  They had prostitutes who specialized in hanging men without killing them.  Although very little more than that is known, as these were underground clubs, I can only imagine what went on inside.  Women barely dressed asking the gents who came in, "Shall I start you off with tea or rope, dear sir?"
Gives a whole new meaning to the game..."Hang Man."  Don't it?

Ah, the joys of being devious.
Until next time,
Cheers and much love,
Delilah Marvelle