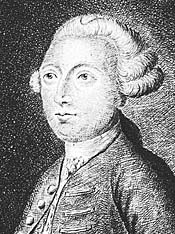 My Dearest Readers,
Everyone knows the term "little black book" and how every rake keeps it safely tucked within the back of his trousers (or front...depending). But did you honestly think it's a modern invention to list the name of women in a book who will spread their legs at a moment's notice?

Allow me to introduce you to the gentleman above responsible for history's first little black book that was put to print and made use of by every man willing to pay the price. His name? Samuel Derrick. Samuel was a struggling poet. After years of struggling to be acknowledged for his brilliance (boy does that sounds familiar...), he decided to get drunk one night (why not?) and headed to his local London pub. Lo and behold, above his tankard of ale, stands a menacing, yet dashing man by the name of Jack Harris who is approached by a man asking for a woman who could pump him. A woman with large breasts, blue eyes and blond hair. Jack whips out a "list" that gives descriptions and the address of every prostitute in London. Well...almost every prostitute. Jack asks for a fee and gives the man the name and address of the woman that will see to his needs.

Visions of sugar plums began dancing in Samuel's head. And he wondered. What if such a list were made available to more than the random randy? And what if this list could be compiled and sold in a way to give it an air of sophistication? A sophistication only a poet could give. With these thoughts brewing, he set down his tankard and decided to take life by the balls (pun intended). He approached Jack Harris, who happened to be one of the biggest pimps in London known as "the General Pimp of all England", and told him of his idea to sell his list. The two came to an agreement that Harris's name would be used to authenticate the list and the first little black book was bound and put into publication for every man in London to buy. It was known as Harris's List of Covent Garden Ladies.

In it were the names and addresses of London's prostitutes and their "specialties." From the year 1757 to 1795 more than a quarter of a million copies were sold. An astounding number for the time. Any man serious about his pleasure wasn't caught dead without it. As for all the London prostitutes, they all begged and paid to be listed. It was good for business, after all. The trouble was, even if a lady (and I use that term loosely) was fortunate to have her name listed in the book and paid a pretty penny to do so, ultimately, she had no control as to what was written about her.

While Jack Harris dabbled in making sure the names and addresses and specialties were in fact legit (he worked hard every night seeing to it...ehm), Samuel Derrick was the one who ultimately penned the verses that were inserted into the book.
at you would see when you bought your own copy of the List (and it wasn't in the least bit complimentary to the poor gal trying to sell her goods):
Printed in the 1773 supplement

"Mrs. Berry, King's Place, Pall Mall
'Mercury upon most women has some effect'
(As a side note, mercury at the time, Mercury was used to treat venereal disease...)

An arrant Brimstone of Irish birth, who pretends to set up as one of the first rank courtesans, and would impose upon us her stale and battered commodity for fresh fruit, but we think our judgement cannot be imposed upon at this time of day, and are of the opinion that she has undergone too many salivations, that the power of Mercury has lost its effect upon her: in a word she is almost rotten and her breath is cadaverous."

A better advertisement for a gal would have been more like this:

Printed in the 1789 Supplement

"Madamoiselle, at Mrs. W-lp-les, No. 1 Poland Street
'Here I would die each blissful night,
Here chase the fleeting time away,
And whelm'd in love's serene delight
Rise full of life at happy day'

Every girl with a beautiful face and a good form, must in some measure, please; but very few among this list of trading nymphs afford that pleasure in enjoyment you meet with, in this delectable piece. She is now on the verge of twenty four, with fine dark hair, love sparkling eyes, and a set of teeth as would defy the power of a Spence to imitate, or the brush of Ruspini to improve. You may toy and kiss with this charming girl, if you please, but she does not suffer that kind of amorous dalliance long; she eagerly thirsts for more substantial pleasure, and has either by experience or instinct, a most pleasing knack of prolonging the dying moment, first as nature, by sounds, and short fetched sighs, proclaim the coming shower, her eager grasp suddenly suspends the liquid treasure and drains, by slow degrees, the soft injection, making it almost, with Dr. Graham 'the critical hour.' This enchanting game she has played for two years, and if you are her partner, she expects at least double the number of yellow boys (this is a slang term for guineas). If report speaks truth, this lady has been a singer at the Opera House in Paris, and we have no doubt that she is a native of Italy."

Sadly, Samuel and Jack didn't live happily ever after. Even with a huge list of women at their fingertips. When both died, the list continued for only a few years longer being edited and put together by unknowns. The Georgian hey-day with sex frolicking was nearing its end and the list was removed from publication due to public outcry from religious snobs.

And there you have it. The very first little Black book in History. If you want to a more detailed version of their story, pick up the book THE COVENT GARDEN LADIES by Hallie Rubenhold. It's an amazing book that makes you cringe, laugh and cross your legs all at the same time...

Until next time.
Cheers and much love,
Delilah Marvelle 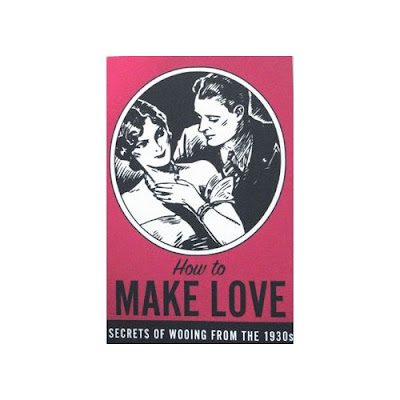 My dearest Reader,
It is quite by accident that I happen upon the most fabulous of books. Though perhaps not *quite* by accident. Considering where I happened to pick up a copy of this particular book I'll be discussing: Sparticus. Now for those of you that don't live in Portland, Oregon, Sparticus is a fabulous adult store with everything under the mattress a woman or a man would ever need. Lingerie, books, wigs, paddles, nipple rings, condoms, you name it. They have it. And if they don't, they know where to get it. So I wandered in (after all, how can one simply walk by such a store and NOT go in?! T'would be a crime) and after passing the pasties, purple and pink wigs, twenty inch heels with tip jars attached to the bottom (I kid you not), dicksticks (it's real lipstick shaped like a penis. I tell you, nothing shocks me anymore), and all the other kinky goodies, I headed for my favorite section in the entire store. And no, it wasn't the dildo section, gentle readers, but rather, the book section. Of course. A naughty writer needs naughty inspiration. So I read this and that and look at this and that and it's all really not that fascinating. Slot A into Slot B. Nothing creative. But then I spotted this fabulous, fabulous reprint sitting on the shelf and simply fell in love with it. Because it captures an era that reflects times gone by in history. The book, HOW TO MAKE LOVE, SECRETS OF WOOING FROM THE 1930's was the only thing I walked out with that day (well, actually, that's not true, but I do not intend to post what else I walked out with as every girl has a right to her privacy...ehm)

So here is a basic overview of the book and why you must get your hands on it:
*It is a man's perspective on love. From the 1930's. (Bwahaha)
*Defines love is an art that can and must be perfected. (Bwahahahahahahahahahaha)
*There are so many great lines that will make every woman want to burn bras. And I quote, "Man was created strong. Woman was created weak. Therefore, it is up to the man to protect his woman. Woman is so physically constituted that she needs a man's strong protection."
*A woman must always be passive. (Because?.... It's easier?)
*Basic customs, such as laying out a cloak on a puddle as in olden days or holding the door open, helps the "basic necessity of establishing this strong-weak relationship as soon as possible..."
*The secret to lasting love: Understanding. (AMEN, brotha)
*Make sure that when you're on the sofa and you want to "make your move" you do so in a manner so as to arrange that she is sitting against the arm of the sofa. So that she has no means of escaping. (Forced seduction, anyone?)
*Oh, and THE BEST LINES EVER to help a guy out with a gal and I quote as I'm holding back a gasp of horrified laughter: "If she flinches, don't worry. If she flinches and makes an outcry, don't worry. If she flinches, makes and outcry and tries to get up off the sofa, don't worry. Hold her, gently but firmly, and allay her fears with kind, reassuring words. Remember what Shakespeare said about "a woman's no." However, if she flinches, makes an outcry, a loud stentorian outcry, mind you, and starts to scratch your face, then start to worry and start to get yourself out of a bad situation."
*Flatter a woman. (The oldest and dirtiest trick in the book, I'd say)
* How to properly place one's arm around a gal in the theatre. There is a right and a wrong way. The right way is to place your arm around her below the upper part of the chair so that no one will see you doing so. The improper way is to place your arm around her AND the seat for everyone to see and pulling her close.
*Love is entirely irrational and unless you understand that, you won't ever understand love. (Um...that TOTALLY makes sense)
*Understand thyself. In turn, you will understand others. (This is actually damn good Dr. Phil stuff)
*Oh, and the best advice ever. Gentlemen. Do remember that 1+1=3. Amen.

Again, pick up this fabulous, fabulous book. It really gives you an understanding as to the mentality of an America that we are still trying to break ourselves away from. Although I must say that it has a lot of very wonderful lines about love and relationships that deserve further scrutiny. The one thing that I most certainly noticed is that the whole notion and premise of the book which discusses "making love" cannot be compared to our definition of "making love." For although kissing and techniques and so on is covered, A into slot B is not. It is more of a commentary to the men about love in general and the paths it leads them down. Which is really fascinating. Because the book really tries to "talk" to men about love and relationships in a very rational and concise manner. To the best of the author's knowledge that is....
I dare you to post your favorites out of the list I gave outlining the book and why it is your favorite. Because this is my blog, I get to say I love them all. Because it is part of a past I know I will never truly understand or appreciate having not lived it. Until next time.