Once Upon a Chucking 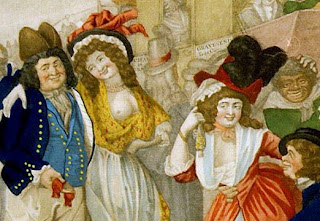 My dearest Readers,
This month's post will be rather...short.  But the history will be just as amusing as anything else in naughty history.  We touch upon a wink in history pertaining to prostitutes and a particular game they used to play.  It was known as "CHUCKING."

According to the Authentick Memoirs of the Life Intrigues and Adventures of the Celebrated Sally Salisbury (which was published in 1723), Sally was notorious for engaging in outrageous ways of entertaining her gentlemen customers.  There was nothing she wouldn't do in the name of money (the whore!).  One of her favorite antics, which made her quite famous and gave prostitutes ideas to last for centuries was her little game which became known as "CHUCKING."  When Sally Salisbury was feeling particularly saucy (and this girl always was, believe me), she would stand on her head, naked and spread her legs for the boys, encouraging them to "chuck" gold coins into her vagay-gay.  The sky was the limit with this one. For it was quite literally a game.  She kept the coins that were tossed but what about those that actually landed *in* her vagay-gay by the lucky tosser?  You guessed it.  He got laid.  Here is a snippet from that 1723 memoir which gives us a delectable peek into her naughtiness:


Between two marble-pillars, round and plump,
With eye intent, each sportsman took his aim;
The merry Chuck-Hole border’d on the rump,
And from this play Sally deriv’d a name.
Within her tufted chink, the guineas shone,
And each that she receiv’d, was all her own.
With echoing shouts the vaulted chamber rung,
Belle Chuck was now the Toast of ev’ry tongue.
Sally no more her Christian Name could boast,
And Priddon, too, to that of Chuck was lost.

So the next time you wonder if a wood chuck could chuck wood, just think about good old leg spreading Sally.  *smirk*
Much love to you and until next time,
Delilah Marvelle
Posted by Delilah Marvelle at 1:00 AM 3 comments:
Newer Posts Older Posts Home
Subscribe to: Posts (Atom)