The power of Cornflakes 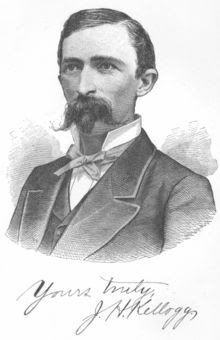 My dearest Reader,
As you are repeatedly learning through my blog, people of the past were probably bigger freaks then we will ever be because of an atmosphere created by male domination and world stupidity as a result of said male domination (sorry guys, it's true). My objective today is to make you realize that the things you eat are the thing you should be choking on because of their history and what it represents.

Diving into quick overview, let's introduce Mr. John Harvey Kellogg. Hm. Kellogg. Sounds familiar? You bet your bottom dollar it is the same bastard's name who is sitting in your cupboard at home encouraging you to slather the flakes with milk. Before you hunker down and shove in another mouthful, you MAY want to know WHO invented Cornflakes and WHY.

Mr. John Harvey Kellogg (born 1852 and died 1943) was an over-educated, church minded asshole. (Note: this is the sole opinion of a romance writer based upon a single man and his beliefs not the church he belonged to. My opinion does not represent the romance genre or all of its affiliates. Heh). He was a Seventh-Day Adventist that was part of a Christian sect that distinguished itself by observing church on Saturday, as opposed to Sunday. He believed that God was in EVERYTHING. Well...except for the cock and the clitoris. He had incredible modern-day notions of being a vegetarian despite living in a society that ate ham and mutton as if they were sugar cookies. He passionately and ardently supported no meat eating not because of all the poor slaughtered animals but because he believed that MEAT increased sexual stimulation (which was very, very BAD) and that it brought out the BEAST in us (shudder). He was the chief medical officer of a Sanitarium and instilled strict no booze and no smoking rules on anyone and anything in his grasp. After all, it was no more good for the body than it was for the soul's conduct. With his sole focus on being grain and vegetarian diet that he firmly believes reduced sexual appetite and the vile need for masturbation, he and his brother, Will (which amusingly enough means "penis" in Shakespeare's time...how fitting!) started the SANITAS FOOD COMPANY in 1897. The two created a recipe known as CORNFLAKES. 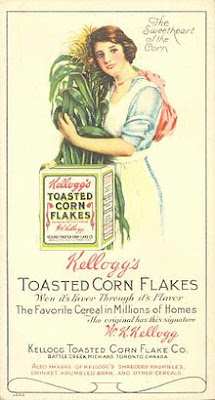 But alas, the two got into an argument. Will wanted to put sugar on the Cornflakes. Mr. john Asshole didn't want sugar in the flakes, so he sent his brother, Will, packing and the two became rivals that created a decade long feud. The guy who didn't want sugar on his Toasted Corn Flakes that are still being eaten today is the same guy who as a doctor and in his sanitarium specialized in rehabilitating "masturbators" (it was known as a serious condition at the time...). Part of his regimen for these masturbators included having his male and female patients eat a diet of Corn Flakes whilst employing disturbing measures of mutilating said patients by having boys and men who were NOT circumcised, clipped on the spot as he believed it would keep them from touching it. But the men got off easy compared to the women. He applied phenol (carbolic ACID) to a woman's clitoris to ensure she never felt anything ever again. Yes, it was a form of female castration. He lived until 91 and to the end believed he had done all of society including all his poor patients a favor.

So the next time you dig into your Cornflakes my dear readers, I ask that you momentarily pause and mourn for those poor souls before us who had to swallow Mr. Kellogg's views on sexuality. Then chew and swallow and hope to whatever god there is, you just didn't sentence your sex drive to hell.

Until next time, I bid thee much love,
Delilah Marvelle