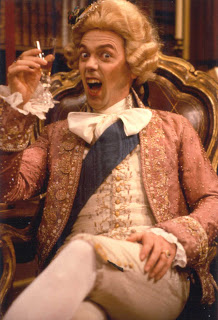 My dearest Readers,
Ever heard of Beggar's Benison? (Without googling it, that is?) I'll be vastly impressed if you have. Obviously, because I am dedicating an entire post to it, you already know what it involves...you guessed it...sex! Beggar's Benison was a Scottish Sex Club founded in 1732 by John McNachtane (no...he's not pictured above). The picture above is more of a toast to its crazy members. And crazy they were.

So...let's start our little story of how this sex club came to be. Benison means blessing. James V was a notorious shagger and it goes back to being a tip of the hat to him. Supposedly, he had a beggar woman carry him over a river because he didn't want to get his feet wet (what a man). After the woman got paid for her noble deed (and no doubt shagged, as well), she supposed said to him: "May your purse naer (never) be toon (empty) and your horn (penis) aye (always) be in bloom (erect)." How would you like to be transported to those days, eh? Where you don't know if people are insulting you or coming on to you? Smirk. This saying got tweaked by the founding members and their motto became "May your prick nor purse never fail." After all, you need a hard on AND money to make the magic happen.

The members of Beggar's Benison delighted in being shocking. During the 1730's, the latest health scare was...oh dear god...masturbation. So these male members (not to be confused with the lower half, ehm) of polite society decided to get together and give society the ultimate FU. Aside from creating an exclusive sex club for the upper class, they masturbated each other and before each other to demonstrate how good for one's health it really was. Sexy, eh? I could imagine all the grunting going on behind closed doors...

This exclusive sex club grew steadily in popularity and soon had branches located in Edinburgh, Glasgow and St. Petersburg. Yes. It had become what we define a 'chain.' They gave the term make 'merry' a whole new meaning. For those of you that don't know, 'merry' in the 1700's was a euphemism for sex. Heh. Who were these members? King George IV of England many aristocrats both English and Scottish. Members would perform sexual acts on each other and watch local girls dance naked as well as set women 'spread eagle' for scientific observation. They had communal heavy drinking and indulged in outlandish food like sheep heads with fruit bursting from the mouth and ears.

Now before you start thinking these were just a bunch of guys having sex with girls in the 'club' - you are wrong, wrong, wrong. Aside form jerking each other off and discussing their sexual encounters with women and all of the fantasies, the club itself wasn't used to host orgies with women. Sex was a serious subject worthy of scientific inquiry to these men (any man, I say...). They kept detailed records of discussions and their inquiries into 'sex.' Such as? One talk in 1753 strongly argued for contraception for a woman so she could be in complete control of her sexuality. Impressive, yes? Allow me to quote their argument: "Sexual embrace should be independent of the dread of conception which blasts the prospects of the female." Ah. Which means, they are arguing that a woman is less likely to engage men due to her fear of conception and as such she should totally HAVE contraception. So she'd be more willing to spread her legs. A tad selfish? You freakin' bet. But hey. They were far more progressive than the rest of the men around them.

Female pubic hair fascinated these members (actually, all men in those days were obsessed with it). Supposedly, the club's most prizes possession was a wig made out of all of the pubic hairs of King George's mistresses. During special ceremonies, each member was allowed to kiss the wig (I'm already spitting at the thought) and one lucky member would actually wear it for the night. Seriously. I know I would have never taken any of these men seriously. Especially the one wearing the female pubic hair wig...gah! When this prized wig was supposedly given away to a competing sex club by a disgruntled member, everyone raged and panicked...until King George enthusiastically supplied another one. Men. Gotta love their pride and their spirit.

Until next time,
Cheers and much love,
Delilah Marvelle
Posted by Delilah Marvelle at 1:10 AM 6 comments:
Newer Posts Older Posts Home
Subscribe to: Posts (Atom)