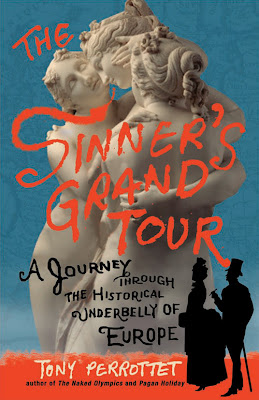 So I get this email from the wonderful, Elizabeth Kerri Mahon, and she's like, "Delilah, did you see this?" and attaches this link to this video (watch the video first or you won't get this post, LOL, click HERE.)


So after watching the video, what does a historical underbelly freak such as myself do? I ran out and bought the damn book. And I read it. I read it like in...oh...4 hours. Let me say that the author, Tony Perrottet basically made me so dang JEALOUS. It is officially on my list of things to do before I die, to visit and see and do all the things he has in this book. His book is pure genius and I recommend you buy the dang thing. It's funny but fascinating and witty and based on real history. Some of it I already knew but there were more details added that made it so delicious to read. And others I didn't know about at ALL....

Holy God, do I ever want to see whatever it left of the SECRETUM. If even to smell it. *Smirk* What's that? In 1866, in the height of Victorian sex paranoia, the British Museum trustees voted to have any and all pornographic related material shoved into a room known as Cupboard 55. From historic dildos to condoms from the 1700's, to Marquis de Sade's works, to paintings and sculptures too graphic to show, it basically boasted over a thousand naughty artifacts that would make Indiana Jones blush. This room is STILL in existence, but because we aren't QUITE the Victorian prudes we used to be, the artifacts in the room have been since dispersed to other areas in the museum for the public to see (that started happening in the 1960's). BUT...there are still things hidden within Cupboard 55 worth seeing. Like wax cocks from Italy, badges worn by medieval pilgrims that proudly boast the vagina which they wore during pilgrimage (who knew?!), a pipe from the Tudor age with a woman holding up her skirts and showing everything beneath it. How can you see these things? They're only shown by appointment every Tuesday at the British Museum. I think a trip to London for that alone is in order here...

That's only one of MANY things this book covered. So many things in fact, I decided to do my own version of hunting down delectable pieces of history in this book....PERSONALLY. So guess what people? Next month, I'll be doing an in depth coverage of one of the items I get to personally get my hands on while I'm in New York City and all of the history behind it and what WASN'T in the dang book pertaining to said object. I got my appointment set up to see it and spent some one on one time with it and take tons of notes. What is it? I figure I'll just make you all suffer until next month. Ha. I'm such a tease.

Until next time with much love,