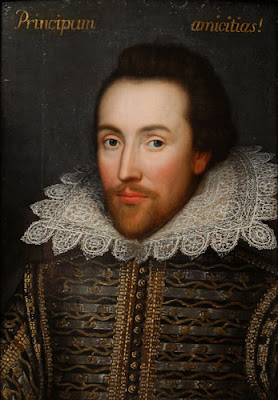 My dearest Readers,
Here's a picture of Shakespeare very few see or recognize. It actually makes him look more savvy than that wizened, pudgy faced picture we're all used to seeing. It's a conspiracy, I tell you. To warp the way we look at Shakespeare. After all, he's SUPPOSED to be the father of all literary plays.

As the book, "Filthy Shakespeare" by Pauline Kiernan brilliantly points out, William Shakespeare's name actually gave cause for eyebrows to be raised even then. For his name was a sexual pun in and of itself and quite literally meant "To Shake one's Spear" which was the definition of wanker. And "Will" was another word for "prick." So essentially, his name quite literally meant "Prick Wanker." No wonder the dude wasn't afraid to write about sex. His very own name set the tone of puns he was meant to write for the rest of his days.

In THE WINTER'S TALE, the character Autolycus is selling "wares" when he arrives into Bohemia. I have to share the lines because it's really THAT good. Here is an excerpt (now remember, to "sing" is a pun on "fuck" and "fadings" refers to "orgasms"...keep this in mind as you read):

Now why is it we never read THIS is freakin' English Lit?! I'm sure none of the guys in my class would have complained about not understanding what the heck Shakespeare was talking about. Because, yes, sex IS a universal language. Which is why Shakespeare loved to touch upon it so much (yes, pun intended...). Bottom line, no matter who attended his plays, be they rich or poor, every adult understood the workings of sex and so it was a brilliant tool he used quite frequently and liberally in order to communicate with his audience to evoke humor as well as emotion (think of Romeo and Juliet's parting is such sweet sorrow scene). That said, I hope you now have a completely different take on Shakespeare and I hope you read the fabulous book "Filthy Shakespeare" and truly take the time to appreciate just how funny and witty and brilliant and naughty the man really was.
Cheers and much love,
Delilah Marvelle
Posted by Delilah Marvelle at 12:00 AM 13 comments:
Newer Posts Older Posts Home
Subscribe to: Posts (Atom)