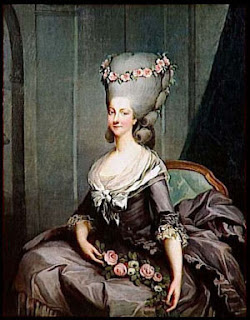 My dearest Readers,
WARNING: if you are in any way squeemish, this post will make squeem (sounds dirty, I know.  I'm not sorry).

When it comes to the history of the French Revolution, you had best place both your hands on your neck and be ready for murder.  Such is the story of Princess de Lamballe.  Only hers goes way beyond murder.

Many know the story of Marie Antoinette, and how she was dragged before the court, and asked to admit that she had been sexually abusing her own son (which she denied, for it was propaganda).  But very few know the story of our poor Princess de Lamballe who was Marie Antoinette's closest friend.  Like Marie Antoinette, Maria Louise of Savoy married young.  At 16, she was wed to the Prince de Lamballe, a man who would inherit one of France's greatest fortunes.  Barely five months into their marriage, the prince took on a mistress. Barely three years later, at the age of nineteen, Princess de Lamballe's husband died of a venereal disease, making her one of the wealthiest women in Paris.  She soon came to the court and became a confidant to none other than Queen Marie Antoinette.  She was present at every ceremony and privy to every goings on and was eventually given the honor of becoming a lady in waiting at Versailles.  As she became closer in her friendship to Queen Marie Antoinette, she was then moved upward to a rank known as "Superintendent of the Queen's Household."  It was the highest rank afforded to anyone in the Queen's realm.  This high honor came at a high price.  She became resented amongst many aristocrats for being so well loved and high placed by the Queen.

Now here is the wicked twist of fate.  Princess de Lamballe, by nature, was not only a good girl, but also a prudish girl.  Especially after the way her husband had died from venereal disease.   She played by the rules when it came to being a real lady and didn't engage men.  And yet, despite her good name and respectable nature, she became the victim of what was known as "anti-monarchist" propaganda.  What sucks about this was that she did everything respectable and yet in pamphlets all across Paris, she was being constantly portrayed in pornographic pamphlets as a lesbian to the Queen (which was far from the truth).  In 1791, when things were beginning to heat up in Paris, Princess de Lamballe went to Great Britain in an attempt to plead for assistance for the French Royal Family that was under threat.  Princess de Lamballe, whilst in Great Britain, also wrote her own will, fearing her own death upon her return to Paris.  Being loyal and a good friend, Princess de Lamballe returned to Paris and served the Queen until that fateful day in August of 1792 when the royal family was seized by the beginning of the French Revolution.

She was brought before a tribunal and commanded to revolt against her own Queen.  She refused.  With shouts of her being a lesbian by the mob (thanks to propaganda), that refusal ended in her being shoved into the street toward a male mob who delivered her the justice they believed she deserved.

In The book MARIE ANTOINETTE: The Journey by Antonia Fraser, the following was done to Princess de Lamballe on the streets of Paris for the world to see:

*Hit by hammers repeatedly on the head until she loses consciousness.
*Raped before and after she loses consciousness.
*Her breasts and clitoris were sliced off.
*Her heart was cut out .
*She was disemboweled.
*Her head was mounted on a pike, her mons pubis then sliced off and worn as a moustache.
*Her head was then through the street on said pike and stopped over at a barber shop so that the princess's head of hair could be restyled.
*The head was then taken to where Marie Antoinette was being imprisoned and held before her window.  It was the wrong window.

While the outcome might have been the same given she was in allegiance with the Queen, the lesbian propaganda that had floated about the streets of Paris for years prior to the revolution, added to the fuel of this horrid crime.  Rest in peace my dearest Princess de Lamballe.

Much love and until next time,
Delilah Marvelle