THE Lord of Pleasure 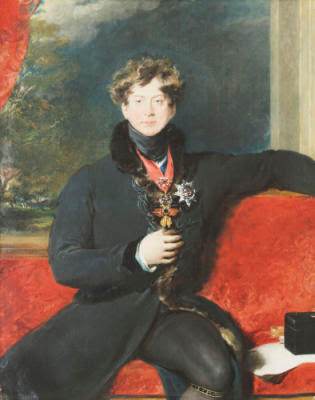 My dearest Readers,
I hereby dub the month of August, LORD OF PLEASURE month. Grin. For those of you that don't know, the second book in the School of Gallantry series is officially out. Though I could technically go on and on about all the reasons as to why you should my book, I'll keep it simple. Just buy it. I promise you won't regret it. That said, I'll skip anymore pressure sales tactics and get back to the point of this blog.


So. In honor of the book's release LORD OF PLEASURE, I decided to focus on a particular man in history who did in fact dote quite ardently upon pleasure (and unlike my own fantabulous hero, Alexander, sadly, this particular man was a royal jerk -- quite literally). There were many, many men in history, mind you, who doted upon all things carnal, from Casanova to Marquis de Sade (though his was a different sort of pleasure...), but allow me to introduce someone many do not necessarily associate with pleasure due to his ruling of the throne being a sparse 10 years. George IV. He was the fourth and last George upon the throne of England from the years 1820-1830 (which are the years I write in). Though his rule was quite short, he enjoyed it immensely and it was more than apparent in his behavior. In his 20's he could dance, sing, hold fascinating and witty conversations that allowed a woman to overlook the fact that he was a....jerk. (In my opinion anyway)


The man loved his women. And how. At seventeen, his first mistresses was an actress by the name of Mary Robinson who was one and twenty. He was fascinated by her and drew her to him not just by being royalty but by promising her 20,000 pounds which he would give her when he came of age. He arranged romantic meetings on an island between Kew and Brentford where they would signal one another from boats with handkerchiefs. He called her his Perdita. But a man of pleasure becomes easily bored and not very long after, he left her before he came of age. And no, he never gave her that glorious sum of 20,000 pounds he had promised (bastard) and it is said poor Mary Robinson had died impoverished.


George was notorious for not only shagging women, but manipulating them (we've all met his type before). The manipulation, it seems, became worse if he fancied himself in love. For instance, when he fell deeply and madly in love with a beautiful widow by the name of Maria Fitzherbert (who was scandalously a Catholic -yes, George was a wild one), and tried to get Maria into his bed, she repeatedly refused him. Would have nothing to do with him. So instead of winning her heart, he decided to manipulate it. He sent his physician to her house in a carriage with an urgent message that the Prince had stabbed himself in a state of disgruntled passion because of her continued refusals and that she was to come with him at once as he was dying. Any good woman with a heart who thinks she is responsible for a dying man whom she refused would have rushed to his side. Which Mrs. Fitzherbert did. She found him upon his bed, quiet and pale and covered with blood, refusing to live because she would not have him. And his intentions were in fact noble. So noble he wished he could have her for his wife. There were many accounts as to where the blood really came from. 1.) That he had in fact stabbed himself, trying to make her feel sorry for him. 2.) had tried to shoot himself in the head, but missed and bounced off his bedpost and grazed his side. 3.) He borrowed some blood off of a poor fellow with the help of his doctor and made a damn good show. Many seem to think number 3 was in fact what had happened. Poor Mrs. Fitzherbert felt responsible knowing all the man wanted was her hand in marriage. She allowed him to put on a ring he borrowed from her chaperone, the duchess of Devonshire, who had accompanied her in the panic.


The Prince recovered quite miraculously and a year later, they were in fact married. It was an illegal marriage due to them both being of separate religions and without having permission of the throne itself. The Prince had to actually bribe a clergyman to marry them. The Prince arrived after dark at her house on Park Lane, the doors were locked and the ceremony took place in her drawing room with only a few witnesses. It was such a scandalous affair that the more than wary witnesses present, who had all signed the marriage certificate had their very names cut off the parchment certificate so that the throne wouldn't come after them. The two witnesses were Maria's uncle, Sir Errington and her brother Jack Smythe. They lived together for many years but seeing that the man needed a legal marriage to settle debts, that is how Princess Caroline came into the picture. And for those of you that don't know, it was anything but a happy marriage.


So why did the prince have debts? Pleasure seekers usually do. The man was known to spend over 20 pounds per week alone on just creams and powders, flowered waters, oils, eau de cologne and bought them in such huge quantities, you'd think he was a woman on a cosmetic binge. Over 20 pounds per week doesn't sound like much, but that would be as if a man today were spending hundreds of dollars a week on cosmetics!! Of course, the man was known to buy everything in large quantities. When he needed a walking stick, it was said he had actually purchased a total of 32 in one day. Why not?


The trouble with pleasure seekers, of course, is that there is no sense of remorse that their actions affect others, as the Prince repeatedly demonstrated by making his wife, Princess Caroline miserable. Of course, he liked to look at it that SHE made him miserable. And accused her of adultery (even though he was jacking off on the side). He also didn't have much tact. When she was very ill and he awaited news as to what would happen with her, it is said that about the same time Napoleon had died and news was brought by a courtier saying: "I have, Sir to congratulate you; your greatest enemy is dead." George's reply was "Is she, by God?"


Needless to say, many were happy to see him go...especially during his last weeks. The man would actually ring for his servants 40 times just to inquire about the time. Even though a watch hung by his side. He simply didn't feel like turning his head. That said, ladies, beware pleasure seekers. Unlike the happily ever after my heroine receives with Alexander in LORD OF PLEASURE, it really doesn't end that way for everyone else...


Cheers and much love,
Delilah Marvelle