The History of the "Overcoat" 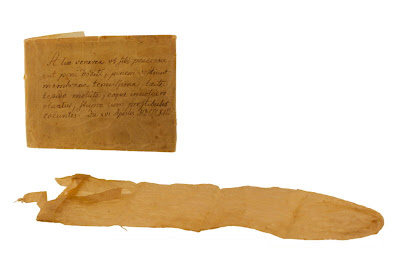 My dearest Readers,
I am quite certain that the above picture (a condom made out of animal intestines with a Latin booklet bearing instruction) quickly gave you the impression that I won't be discussing the sort of overcoats a man pulls onto his shoulders but rather the one he pulls over his cock. In England, a condom was referred to in slang terms as an "English Overcoat." But was it really English? Uh...no. Truth be told, no one really knows where its origins come from. Some say it came from the French town of Condom (those French, after all, *were* naughty...). While others claim it came from Dr. Condom who was not only a British doctor but an earl (dubbed the earl of Condom...yes, you laugh, but he really *was* the earl of Condom). Supposedly, the earl of Condom had "perfected" the "sheathing" casing in the 1600's in an effort to protect King Charles II from venereal disease. Myth? Truth? Who knows. Either way, King Charles II was indeed known for womanizing and sticking his cock in places he oughtn't.
The very first appearance of the actual word "condom," however, wasn't seen until 1710. Whatever the case may be, it is a known fact that condoms were around long before the word "condom"came into existence. The Ancient Egyptians had them. Which never really surprised me. If they could mummify bodies, condoms were a piece of cake...or rather a piece of intestine or leather wrapped around the best part of the body. Fortunately for the Egyptian women, the men weren't using papyrus. Snort. Below is an example of an Ancient Egyptian condom. Note these sort of things were never discussed in History class... 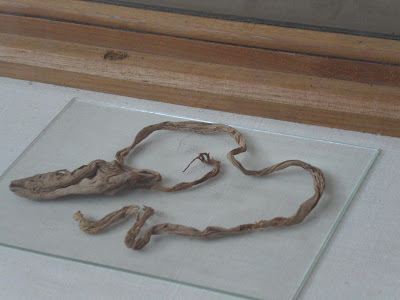 Pretty yes? Wouldn't you just *love* to see YOUR man wearing this in the bedroom?? As you might imagine, the cock was placed into the casing and the long piece tied snugly around their waist. After years and years of perfecting the condom, men kept on reducing the length of what held the sheath in place down to a mere pink ribbon that was neatly tied around the root of the cock. The pink ribbon was actually standard for a condom since the 1500's and into the early 1800's. Why pink? Why ever not? The men were wearing it for the ladies.... Though in truth, Gabriello Fallopio (who discovered the existence of the Fallopian tubes) added the pink ribbon to a brand of condom he was perfecting and it had remained the symbol of a condom all the way up until the rubber ones came onto the scene. While many speculate what Ancient Egyptians actually used their condoms for (birth control, venereal disease, ritual), one thing is clear. It was used during sex.

How comfortable were they? I'm guessing they really weren't. After all, some were made out of leather and linen, for heaven's sake. And if they weren't leather or linen, they were usually made out of some animal intestine or another. Without artificial lubricants which fortunately our day and age offers, I imagine there was a whole lot of chaffing involved for a woman. Youch and youch. The reality is it wasn't about preventing the appearance of children but rather disease and obviously a woman's pleasure took the back of the carriage.

Condoms or "condums" (as it was written when it first appeared in the English language), made its appearance among European society in about 100 to 200 AD. Proof of this comes from an old cave painting at Combarelles in France (those French again...) depicting a man and a woman copulating whilst the man's cock is "covered." Of course, many argue that although this has been stated as a fact, there are no pictures that have been offered up to verify if in fact this cave painting does exist. Sounds like a field trip to me. If I ever make it out there, I'll be sure to bring my camera and post it on my blog.

But here's where all their intelligence ends. Condoms for the most part were bought and "reused." At shops, if a gentleman couldn't afford a condom (for they were rather expensive), he could buy a 'used' one. The men were simply instructed to 'cleanse' the condoms both old and new using milk. This was done not just to clean it but also to 'moisten' it. Aside from the stench the milk no doubt created (eck...), disease kept on spreading and spreading because these morons kept reusing and reusing.

Although there are record from the Middle Ages of clergymen recording methods of birth control which included the use of a condoms, it really wasn't seen as a birth control device until one very popular man made it such....Casanova himself. Aside from using lemons as spermicides, he also used condoms for the same purpose. Of course....Casanova liked to use condom to entertain and shock his guests by blowing up his own condom before ladies and men alike. Nothing like tooting one's horn...Below is a sketch of his 'tooting'... 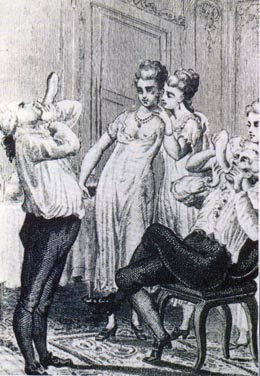 The days of tying little ribbons around one's cock came to quick end when the rubber was invented by Goodyear (yes, the tire company!) and Hancock (quite the fitting name, don't you think?). The two had discovered 'vulcanisation.' It is a process in which rubber was turned into a thin elastic sheath. They also discovered how to mass produce them and in 1861, in New York City, the very first ad went into Newspapers advertising "Dr. Power's French Preventatives." I guess no one would take it seriously if the word 'French' wasn't thrown in...heh. Of course, the big money didn't last long. 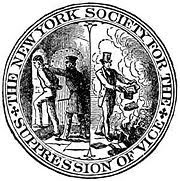 In 1873, the Comstock Law was passed making it illegal to send any "obscene" things through the mail. And obviously condoms fell into that bracket. It gave the Post Office the right to seize every condom that was being sold through the mail via those advertisements. That law, believe it or not, stayed in effect here in the United States up until 1965 after many citizens, including doctors, women and men argued the need. By the 1930's, rubber condoms were being produced at a mass of 1.5 million a day. That's a hellofa lot of sex. And I can only imagine with the population boom how many is in production today...not including variety. So the next time you see a condom, ladies (and yes, you men) bow to it in respect. It's come a long, long way.
Until next time, cheers and much love,
Delilah Marvelle
Posted by Delilah Marvelle at 10:06 PM 12 comments:
Newer Posts Older Posts Home
Subscribe to: Posts (Atom)