In honor of THE PERFECT SCANDAL which is officially out in stores, I give thee the story behind the story. Although there are many facets that made this book come together, there is one facet in particular that I'll be delving into because I'm all about the scandal, baby. Which is why we'll be touching upon Catherine the Great. Catherine the Great is what I define as the ultimate female mover-and-shaker of the 1700s and one who had quite the reputation. Was she one of Russia's strongest monarchs? Or one of the most over-sexed rulers? It depends upon who is writing Her-story. 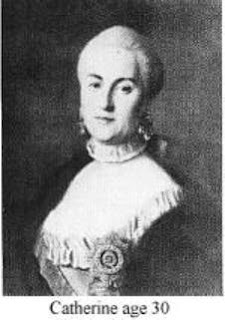 She was born in 1729 and named Sophia Augusta Frederika. Her parents were German royalty, and through her mother's line, Sophia could lay claim to the crown of Sweden. Sophia grew up to marry the nephew of Elizabeth, the Empress of Russia (who had been engaged to Sophia's uncle). Empress Elizabeth considered Sophia a suitable wife for Peter, her heir, so in the winter of 1744, she invited Sophia to meet him. Sophia fell in love, not with her husband-to-be, but with Mother Russia. She learned the language, the culture, and to the delight of Elizabeth, converted to the Russian Orthodox Church. With her conversion, she was given a new name Yekaterina - Catherine. Some say this conversion was political expediency, but given Catherine's later efforts at reform, it seems at least some of it came from her heart. 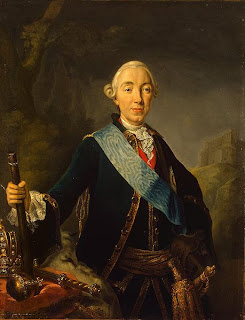 Peter III turned out to be a great choice as a route to the throne and a less-than-adequate choice for husband. He suffered from poor health, a virulent temper and seemed to be emotionally stunted -- he loved to play with toy soldiers, drank to excess and eight years into the marriage both Peter and Catherine were apparently still virgins. At the very least, there was no heir. Catherine spent those eight years reading history voraciously. Peter spent it playing with his toy soldiers. It is rumored that Elizabeth, anxious about the succession, condoned Catherine taking a lover. A male heir was produced, which Peter acknowledged as his own. In 1761, Elizabeth died a happy Empress, thinking the crown was secure.

As Empress, Catherine turned her attention to applying all she'd learned into helping the country she loved. She enacted reforms in agriculture (the study of soil, travel grants to England to purchase new machines), built new factories, and reformed trade. By 1765, three quarters of the debt she'd inherited from Empress Elizabeth was paid off. Public health also came under scrutiny. She invited to her Court Dr. Thomas Dimsdale (a Scotsman who did groundbreaking work on a small-pox vaccine) and took the vaccine herself. Then, education. She established schools and increased the number of grants to study abroad. Finally, with her great love of Russian culture, she commissioned art and built theaters, including The Hermitage.

Amidst all this incredible history, and during her marriage, she fell in lust with many men and followed upon that lust. However, the one lust of her life we'll be touching upon is the one that created the basis of my story. Before the young Polish Count Poniatowski became the King of Poland in a formal coronation that took place in Warsaw in 1764, he was Catherine the Great'slover. 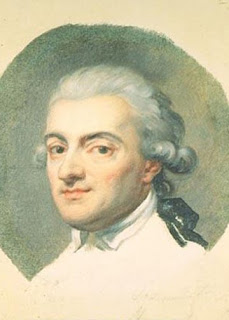 They were introduced, of all things, through England's politics. Catherine was so smitten by the young, intelligent and handsome Count and knew she had to have him. The Count, in turn, was also smitten. And so the torrent relationship commenced, being kept in utmost secrecy. She would dress as a servant and sneak out of the palace where he would be waiting with a carriage. He, in turn, would dress as a musician and carry in an instrument (we know which one!) into the palace and they would sneak off into one of many hidden rooms. One of these hidden rooms, I included in the book itself. It was a room where the Empress escaped to and few even today know of. The room was hidden behind a bookshelf beyond her bedchamber and when you descended into it, you found yourself in a lush room whose walls were completely covered with mirrors. You thinkin' what I'm thinkin'? Oh yeah. I've no doubt she made DAMN good use of it. And I made sure I made damn good use of it in MY book *wink, wink*.

Her affair with Poniatowski carried on until she became pregnant with Count Poniatowski's child. A girl by the name of Anna Petrovna (not to be confused with Catherine the Great's OTHER daughter, Grand Duchess, Anna Petrovna who died at 20). Anna's birth was recorded to have taken place in 1757. Mysteriously, this child died 15 months after her birth and there is little to no information about this child. Catherine the Great, who kept a detailed diary, didn't even speak of her. And so....this mysterious death created a "what if" spark in my mind. What if the death had been staged? There certainly would have been reasons for it and it whispered of possibilities. Possibilities I tweaked to create THE PERFECT SCANDAL.

What further fueled this idea for me was that shortly afterward, the Empress had also made Count Poniatowski King of Poland by seizing the throne for him by force, hoping to have complete control over Poland. She found that her lover wasn't playing by all her rules. Everything rapidly fell apart between them as well as under his rule and the whole of Poland was partitioned into three sections by Prussia, Russia and Austria. The first partition was in 1772, the second partition was in 1793, and the third and last partitioned that eliminated Poland as an independent nation was in 1795.

Catherine the Great dethroned Poniatowski and took Poland for her own, overruling her passion for her pride and her country. Interestingly enough, Poniatowski became a prisoner of sorts to the Empress. He was brought out to Saint Petersburg and was kept under close surveillance until his death in 1798, even two years after the Empress had died (in 1796).

Either way, Russia was changed forever by Catherine. She died in 1796 and as for the cause of her death -- the rumor about the horse is a lie. It was spread by haters since she did things that women of that time period weren’t supposed to do -- take over a country and take on as many lovers as her heart desired.

Amen to power, lust and scandal.
Cheers and much love,
Until next time,
Delilah Marvelle