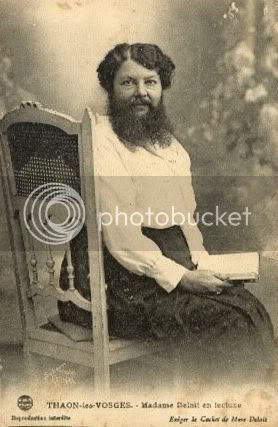 My Dearest Readers,
One of the biggest DON'T for a wife? Don't let your appearance fall to the wayside (see picture above...). Try to maintain said appearance by shaving in all the appropriate places...ehm. That said, allow me to be serious. Last month the men got the don'ts. This month, the women get the don'ts. So without further ado, I give thee the most popular Don'ts for Wives from a book
printed back in 1913 by Blanche Ebbutte.

*"Don't worry about little faults in your husband which merely amused you in your lover. If they were not important then, they are not important now. Besides, what about yours?" (The trouble is, we didn't have to deal with those seemingly unimportant faults on a daily basis, so I don't know how much I give this particular don't credit)

*"Don't expect your husband to be an angel. You would get very tired of him if he were." (We all love bad boys anyway)

*"Don't interpret too literally the 'obey' of the Marriage Service. Your husband has no right to control your individuality." (Amen)

*"Don't forget to wish your husband good morning when he sets off to the office. He will feel the lack of your good-bye kiss all day." (I say it makes him eager to come home and collect)

*"Don't nag your husband. If he won't carry out your wishes for love of you, he certainly won't because you nag him." (So true, so true)

*"Don't manage your husband too visibly. Of course, he may require the most careful management, but you don't want your friends to think of him as a hen-pecked husband. Above all, never let him think you manage him." (This applies to teenagers, too)

*"Don't say you can't allow smoking in your drawing room, or else don't expect your husband to sit in it. Let his home be Liberty Hall in every respect." (To hell with this way of thinking...the house would be burned down by the end of the week)

*"Don't be satisfied to let your husband work overtime to earn money for frocks for you. Manage with fewer frocks." (Or marry rich…)

*"Don't let him have to search the house for you. Listen to his latch-key and meet him on the threshold." (Beck and call. Beck and call. I would not have survived my marriage back in the day)

*"Don't greet him at the door with a catalogue of the dreadful crimes committed by servants during the day." (If I had servants, I wouldn't be nagging my husband, I'd be thanking him. Every day)

*"Don't be out if you can help it when your husband gets home after his day's work." (Screw this way of thinking. I'd never get out of the house)

*"Don't try to excite your husband's jealousy by flirting with other men. You may succeed better than you want to. It is like playing with tigers and edged tools and volcanoes all in one." (So basically it sounds like he would beat the shit out of you. So don't make him jealous. Good advice)

*"Don't forget to 'feed the brute' well. Much depends on the state of his digestion." (Again, you'll avoid getting the shit beat out of you)

*"Don't persist in having mushrooms on the table when you know they always make your husband ill. They may be YOUR favorite dish, but is it worth it?" (Sounds like we're talking about magic mushrooms here…)

*"Don't get angry if your husband says that he never tastes cake like that his mother used to make. Write and ask her for the recipe." (Or better yet, just sent your husband home to his mother…)

Truth be told, what was fascinating about the wife don'ts as opposed to the husband don'ts was that it was really nit picky stuff. Nothing I would define as being able to save a marriage...interestingly enough, there were more DON'TS for wives then there were DON'TS for husbands. Hmmmmm......times haven't changed. At all.
Until next time.
Cheer and much love,
Delilah Marvelle
Posted by Delilah Marvelle at 1:03 AM 8 comments:
Newer Posts Older Posts Home
Subscribe to: Posts (Atom)