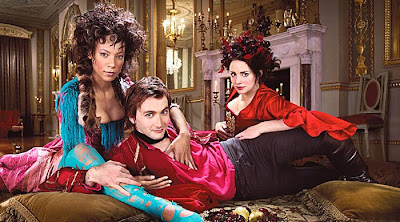 My dearest Readers,
No. The above is not really Casanova, but rather, David Tennant 'playing' Casanova. But I feel it captures the spirit of Casanova beautifully. That devious sparkle and lounging about, not with one woman but two (and sometimes as many as five!) at every turn.

Casanova, what everyone generically knows of him, has been dubbed the ultimate lover. Though I should probably point out that the notion of him being "the ultimate lover" came from him and him alone through his memoirs, THE HISTORY OF MY LIFE. It is a very long history, might I add, so long (volumes and volumes and volumes), I couldn't have possibly done a single post on Casanova. He requires several. As a quick note, however, as wonderful as his memoirs are in relating history, he cannot readily be trusted to relating his OWN history. There are truths sprinkled throughout pertaining to his life, but the one thing every woman has to realize about Casanova is that he always took the ordinary and made it extraordinary. That's why all women loved him. He never settled for ale. He always wanted champagne and wanted everyone to drink it with him. Even though he couldn't afford to buy it...

So let us disregard Casanova's take on his life and delve into the REAL Casanova. 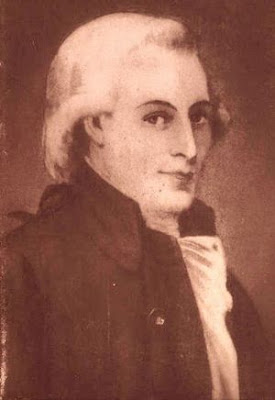 Giacomo Casanova was born on April 2nd 1725 in Venice, Italy. He was born unto a struggling family of actors/dancers (Gaetano Giuseppe Casanova and Zanetta Farussi), setting the stage for what his life would become. An act. It is believed, however, that Zanetta only married Casanova's father and that Casanova himself may have been the son of Michele Grimani who was the owner of the S. Samuele theatre where Zanetta and Gaetano both played. Casanova himself believed he was Grimani's son, mostly due to the fact that he always said things like, "My Mother came back to Venice with her husband." He never refers to Giacamo Casanova as his own father, even though Giacamo was married to his mother. Which is fascinating. According to other sources, Zanetta's next child was not Giacamo's child, either. So as you might imagine, Casanova didn't follow in the footsteps of his father...but rather his MOTHER. The second child, who was Casanova's brother (or half brother) was born in London in 1727 as was said to have been fathered by the Prince of Wales (later King George II), as Zanetta was the Prince's mistress. Casanova had a total of four siblings. Three brothers and one sister.

Casanova's mother left all of her children in the care of her mother in Venice to travel and act all over Europe. It impacted Casanova greatly and in some Freudian aspect, may be why he pursued women so damn much. He was symbolically pursuing his own mother and wanting 'her love.' Casanova himself was very ill as a child and suffered from constant nosebleeds (there's a hero for you!). He remembers his grandmother bringing in 'beautiful women' to try and cure him of his nosebleeds using gifts and incantations. It didn't work but he fondly remembers it and was grateful to every woman who visited. Is it any wonder that with a missing mother and a beautiful woman seeking to cure Casanova's 'ailment' lent itself to the creation of a man who sought to emotionally balm himself with beautiful women? Casanova's nose bleeds didn't stop and eventually a doctor was brought in who insisted Casanova needed a change of air as the density of air in Venice was pushing out the blood from his nose. With Casanova's 'father' now dead, Zanetta, through letters, turned pleadingly to Grimani for assistance in getting him out of Venice. Which lends itself to the story that Grimano most likely WAS Casanova's father, as Zanetta only turned to Grimani whenever Casanova needed assistance, but not when any of her other children needed assistance. Casanova, with the help of his 'father', was moved to Padua. Casanova felt further isolated and felt as if no one wanted him anymore and were using his nosebleeds as an excuse to get rid of him.

One thing that is very striking about Casanova is how sensitive he was about the way people treated him. He paid attention to it and never forgave or forgot anything. He soon found himself in a boarding house with a Slav woman whom he claimed had a mustache and only fed him thin soup, a bit of dried cod and apples. He hated his sleeping arrangement so much (due to the beds having lice AND fleas and three other boys...) that he slept in his classroom instead. He was eventually taken pity upon by his teacher, Dr. Gozzi, who took him into his own home for he thought Casanova had incredible potential as a student. Casanova claims Dr. Gozzi (who was a priest) was a suppressed sodomite, as the man appeared to be 'frightened' of women. This priest lived with his parents and his sister, Bettina. Bettina (who was seven years older than Casanova) became Casanova's first obsession. She flirted with him and encouraged him, but Casanova was only eleven. That didn't stop Bettina. She decided to call him into the house and instructed him to take a bath. Casanova, at the age of eleven, discovered there was more use to his penis than pissing. He experienced his first orgasm at the age of eleven at Bettina's 'hands.' But just as he was thinking he had found his true love, along comes a hairy man of fifteen and shacks up with Bettina, crushing his dreams. Casanova was so devastated (at the age of eleven) that he actually considered murdering them both. Bettina caught smallpox, however, and he did, too, thwarting his plans, and ridding him of his passion once and for all. Bettina ended up marrying two years later, whilst Casanova carried the physically memory of Bettina for the rest of his life: three pockmarks on his face.

At the age of twelve, Casanova entered the University of Padua (yeah, 12 was the old 20 back then...). University life, however, created what would forever be the Casanova we all know. He partied, instead of studying, and gambled so much (at the age of 13) that his grandmother had to yank him out of University life and bring him back to Venice where he was admitted into the order of the Catholic clergy. He was expected to wear a robe, carry no sword and was forbidden to duel. But that was all that was expected of him. However, even THAT was too much constraint for Casanova. He never seemed to get along with any of his patrons or priestly tutors and enjoyed drinking a bit too much (although he was not an alcoholic...). At the age of 17, Casanova received his degree of Doctor of Law and that summer stayed with a peasant family whose daughter forever changed the way he understood women. Her name was Lucia. She being 15, he thought she was much too young to seduce. But he adored her and was madly in love with her. They spent nights upon nights together laying in bed talking and laughing and imagining what life was like. Never once did he make his move, though he wanted to. For in his heart, he felt as if he would become a form of Bettina. Forcing a young girl into a game that was not meant to be played by so young a heart. So whilst he loved her, he never once said it or showed it. He parted with her and the family and returned a year later, hoping to reignite what had been between them only to find his beloved Lucia had been seduced by some lecherous bastard and made her pregnant. As a result she was turned out of the house by her family. Casanova was devastated and blamed himself. He believed that if he had been more open in announcing his love, she would have waited and would have not ended up with the horrid life she was now imprisoned to. It created the Casanova we all know and love. From that day forth, he never held back from announcing his intentions to a woman ever again....

Alas, this is where I must end Part 1. There will be a total of 3 parts to Casanova's life. Part 2 will be entering into the debauchery (yay!) and the name he made for himself all across Europe.

Until next time, Cheers and much love,
Delilah Marvelle
P.S. Below, I have added a new feature called Historical Eye Candy. Let me know what you think. Waggling brows...
Posted by Delilah Marvelle at 7:40 AM 13 comments:
Newer Posts Older Posts Home
Subscribe to: Posts (Atom)