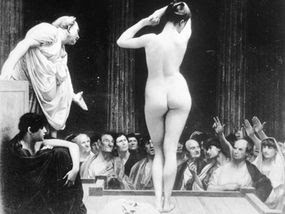 My dearest Readers,
There is so much to cover when it comes to Rome and their naughty history, I could spend all day and night typing up a fifty page blog post. But because I don't want your eyes rolling to the back of your head, I'm going to actually showcase what I think deserves showcasing. And believe me...it's GOOD.

As many of you already know, Rome was a crazy place to live in and have sex in. And because it was crazy, many laws were put into place to put people into place. (heh. good luck with that, Caesar). Married men in Rome could have sex with whoever the hell they wanted to. Widows, Slaves, Prostitutes, and anything on four legs (you think I'm kidding?). The men of Rome had it made. They could have sex with everyone, including their wives.

Oh, now wait...not everyone. They couldn't have sex with virgins and other people's wives. Why? Strict adultery laws (which I'm sure the men grumbled about, especially when they were eyeing their neighbor's hot wife laying out the pottery by the door.) These "strict" adultery laws, however, didn't irk the men at all, given they were screwing everything else. These laws actually slammed the wives hard (pun intended). Because unlike the husband who could stick it in anything except other wives and virgins, a married woman wasn't allowed ANY sex outside of her husband. Because the law itself was written as such that it was a CRIME to have sex with a married woman. Not a married man. Huh. Wonder who wrote THAT law? If an adulteress was caught having sex outside marriage, the punishment was the loss of all her property (including her children) and exile.

Oh, but now we get to the good part. You think Roman wives took this laying down? *Smirk* Hell, no. They were a lot smarter than the Roman men gave them credit for and they found their glorious little loophole in another Roman law they bent in their favor so they could get themselves a little somethin' somethin' without losing everything.Ancient Roman law was written as such that any woman registered as a prostitute (because it was considered a very legal profession) could NOT be punished for any sex acts. Including that of adultery. Because hey. A job was a job.

Men wanted the best of both worlds and wanted prostitution legal so they could do what their wives couldn't do. But you guessed it, the wives beat their husbands at their own game. They just registered themselves as prostitutes and got around the law in a bow worthy way. Believe it or not, there were many wealthy and high profile families in Rome which had mothers and grandmothers alike registered as....you got it...prostitutes.Roman Suetonius (c. 69-c. 140 C.E) went on record to complain about this loophole to his fellow Roman men. He said, "Married women from well-known families are registering as prostitutes. They are escaping punishment for their adulteries by renouncing the privileges of their rank in society." Well, now. There you have it. Women *are* smarter than men, after all.

I hope you enjoyed this bit of naughty history and until next time,
Much love to you,
Delilah Marvelle
Posted by Delilah Marvelle at 11:59 AM 7 comments:
Newer Posts Older Posts Home
Subscribe to: Posts (Atom)