Women and brothels, oh my! 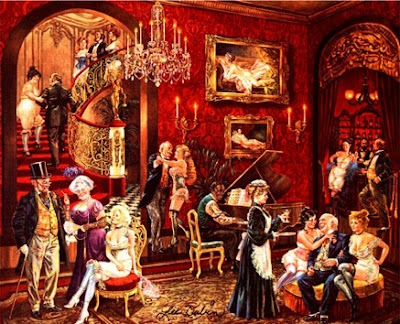 
Ah, the good old days of brothels. They went by my names. How many? Let me count the ways and the years the terms came into existence. Stew (1362), Bawdy House (1552), Leaping House (1596), Bagnio (1624), A Place of SixPenny Sinfullness (a mouthful that came to be in the 17th century), Nunnery (late 17th century), Ladies College, House of Ill Repute, House of Ill Fame, House of Evil Fame and the ever creative The Naughty House (all terms which came into existence in the 18th century). And crazy though it is, I could go on...

Unlike the history of street prostitutes, brothels were well documented for us to study because they were run like businesses (and WERE businesses) and had accounts and kept books that listed EVERYTHING. So how about we have some fun and dig into this naughty bit of history?

In Covent Garden, in 1752, a certain Mrs. Haddock died leaving behind a brothel empire, one of the most lavish ones to have ever been known in London. The fixtures and fittings alone were worth several hundreds pounds, estimated to be worth THOUSANDS in today's market. Her brothel had 32 beds and 14 dining tables (nothing like eating you know what....snort). The contents of the brothel's wine cellar were about 165 pounds worth (about $12,000 today). And the silverware was said to be worth three times the cellar.

In a brothel, be it lower class or higher class, there was always a woman in charge of the prostitutes and establishment itself. Men vanished from the brothel trade (meaning owning it), toward the late 1600's for reasons having to do with the fact that women knew what men wanted as opposed to men knowing what men wanted.

I'll be touching on the upper scale brothels given they involved more and offered more. Women who started these upper scale brothels knew that men liked "exclusivity" and seized on using the idea. A certain Mrs. Goadby on Marlborough Street was one of them. She hired only the most beautiful women and physicals for all of her women on a weekly basis to ensure they were clean. If any of them had minor problems, like pubic lice, it was treated (by shaving) and the girl was rested until she was ready to go again. Anything more serious (like syphilis) and the girl was instantly booted. It was all about ensuring a good reputation and that her girls were clean. She sought to ensure it so much that she supplied her customers with "Mrs. Phillips' Fames New Engines.' (Condoms). The woman also sold dildos to gents and the best French food and wine there was to offer, whilst dressing all of the women in the latest Parisian fashions.

Alcohol was forbidden to her girls, except for sips with guests, and all of them were put on a regiment of drinking milk to ensure good skin and hair (can you imagine if you were lactose intolerant?). The hopping hours of a luxury brothel was during the hours after the theatres closed in London and a set price was put on admission itself so you wouldn't get just anybody walking through the door. The doors and the legs of these women were open 7 days a week. Yes, even on Sunday. ESPECIALLY on Sunday given that music and card playing was prohibited and all the theatres were closed. That meant men had more time on their hands and Sunday was usually their busiest day. Ha.

So how did a man go about getting in? First, he paid whatever the admission price was. The moment he walked through the door, he'd be handed a scented silk handkerchief that was his "marker." He would hold onto it while he settled in and checked out the inventory. When he made a decision, he would hand the handkerchief to his choice. Mrs. Goadby apparently allowed each girl to deny up to two handkerchief a night out of respect for them (impressive). After that, she was screwed. Quite literally. Heh. Once a girl accepted said handkerchief, it wasn't skip and hop off to bed quite yet. She became that gent's "partner" for the entire evening. She would dance and dine and entertain him, both of them getting to know each other (this is what separated the upper class brothels from the lower ones where it was just in and out).

The brothel itself would have been lavishly decorated. Many bedchambers had themes and mirrors located both on the ceiling and around the room so the gent could watch himself "doing it." Any money or gifts offered weren't offered directly to the girls themselves. They went straight to good old Mrs. Goadby. Though the actual percentage cut isn't recorded, most likely, the girls got half or way less, as even the best Madams were penny-pinching bitches.

To give you an example as to the frequency of certain patrons and I'm quoting from MADAMS by Fergus Linnan: "A certain Lord L____ was known to frequent on Sundays, Mondays, Wednesdays, and Fridays and always sought not one but TWO ladies for each and every single one of those nights." Talk about virile. And expensive.


In a brothel of any scale, be it exclusive or dirt poor, a whore was expected to pay out a lot from her earnings, usually keeping her locked in with the brothel she was working for. Here is a list of the things they had to pay for our of their own pockets: board and lodging, gowns, corsets, shoes, petticoats, hats, ribbons, hair pins, stockings, tooth powder, brushes. Basically anything that was known as upkeep. A woman might have earned 5 pounds and a few shillings for the week and quite literally pay out 5 pounds for all of the above items, leaving her with only a few shillings. Most of these women waited and hoped for certain patrons who would sponsor them. Basically, make them mistresses. When that happened, a gent usually had to pay the Madam a good pound given that he was taking one of the girls out of circulation.


Needless to say, these brothels offered a man a variety of pleasures, no matter their pleasures. Certain girls would even have known specialties. For instance, did you know that good old King George IV absolutely LOVED having his anus tortured? And you better believe there were girls who specialized in said torture. God only knows what really went on in those brothels, but I will say, I would hate to have a job where my finger would be up some guy's dirty ass all night. Snort. Aren't you lucky you weren't whoring yourself back in those days? At least today people bathe. Or at least...some do. Gotta love history. Anus torturing and all.


Until next time and much love to you,