My dearest Readers,
It always fascinates me to come across books that reflect the prudery that influenced an entire generation.  And we're not talking all that long ago, either.  A friend of mine was so gloriously kind as to gift me with a fabulous book she had come across in her attic that was printed in 1919.  It's called EUGENICS or Nature's Secrets Revealed, The Scientific Knowledge of The Laws of Sex and Heredity.

Let me start with this disclaimer: Ha.  The only thing revealed in this book is the notion that sex is still a four letter word and that women have no rights back in 1919.  I will emphasize that this book was published not even a hundred years ago.  Scary.  And needless to say, we're going to dissect this sucker by giving you up close and personal cuts from the book itself.  I've decided to break this post into two parts because there's just WAY too much to share of this 500 page book.  Yes.  500 pages of skirting around the issue, lol... 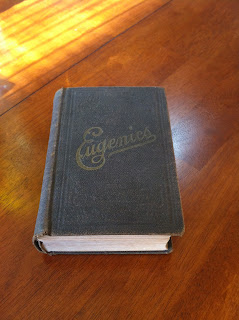 Topics explored and quoted with snide commentaries by Yours Truly:

BAD BOOKS: One half of the youth in our prisons and houses of corrections started their evil careers by reading bad books, or at best, worthless novels.  (God save those reading my books...) These books are the nicotine and alcohol of literature.  They poison, and burn, and blast the head and heart as surely as their cousins do the stomach.

RUINED BY BAD BOOKS:  An eighteen-year-old girl suspected of being the writer of threatening letters received by the Sunday School Literature publisher, and other persons of the city, on being arrested and tried, confessed that it had been the reading of bad books that led her into the crime.  No one can estimate the amount of crime and lawlessness that is directly traceable to the dime novel and other pernicious literature. (Oh, yes.  I'm going to hell and guess what?  So are you!).

Bad Pictures: Bad reading burns deeper than does filthy conversation, and bad pictures, perhaps make deeper scars than do bad books.  Both burn very deeply into the souls of boys and girls, young men and young women.  Dr. Leonard, a leading divine, tells of the dreadful effects of foul pictures shown him by a Germany shoemaker as a boy. (sounds like German shoemaker was a perve and it had nothing to do with f*cking pictures....)  Dr. Leonard, like thousands of other pure men, would give his good right arm if these vile pictures could be forgotten.  (Sadly, it sounds like he was sexually abused as a boy and it's being blamed on pornography).

Characteristics of Woman: There is beauty in the helplessness of a woman.  (Nice)  The clinging trust (or stupidity) which searches for extraneous support is graceful and touching.  Timidity is the attribute of her sex, but to herself it is not without its dangers, its inconveniences and its sufferings.  Her first effort at comparative freedom is bitter enough, for the delicate mind shrinks from every unaccustomed contact.  The secret of her weakness is hidden in the depths of her own bosom (Note: this man was written by a man.  Surprise, surprise.  Delilah would also like to note that there was no page found on the characteristics of a man...)

A Sterile Marriage: I will describe one more case, in which the two parties were perfectly neutral to each other, and therefore sterile and childless. (This is in 1919, when functions and sterility were, in fact, understood...talk about bad books)  A man spoke o me one day and said, "I would like to talk with you."  He asked me to explain the grounds of my teaching, which I did as I have done in this article.  He then said, "How would it be with me in case I should have married a wife who was tall and slender, with snapping black eyes?" (Sounds like he thinks he married the wrong woman).  He himself was tall, say five feet eleven inches.  We had been speaking of Napoleon and Josephine, and why they were childless together and I went on to show him that substantially the same conditions existed in his case, that he and his wife were so closely alike as to be neutral to each other and therefore sterile and childless.  He told me they had been married fourteen years and had never had a child, and that he had no idea why, but now he could see that the case was the same with them as with Napoleon and Josephine.  (Talk about a REAL Napoleon complex...)  It was plain to see that he had married a woman he had over idolized and so had formed a strictly neutral marriage.  (WTF).

Mental Effect of Sex Ignorance: In his investigations of the asylums of one nation, Dr. Pique claims that he found that 82% of all cases of insanity among females and 78% among males, involved sexual issues and that early sex instruction would have wholly prevent many cases and would have postponed the mental breakdown.  (Um, yeah.  Notice how the insanity percentage of women is higher.  Hm)

Effects of Sexual Excitement on Women (oh, this is going to be good!): Frequent excitement leads to ovarian troubles, leucorrhoea (vaginal discharge), or whites, corresponding to sexual weakness in the male.  The eyes that once glowed with lustre will become pale and sunken (yeah, if you do it every two minutes and get no sleep!).  The cheeks once plump, ruddy and rosy with health will become thin and faded.  One or many more other troubles may follow.  With the kindest interest in you and yours, believe me, sincerely your friend, T.W.S. (This dude actually wouldn't even use his real name, only initials.  Snort.) 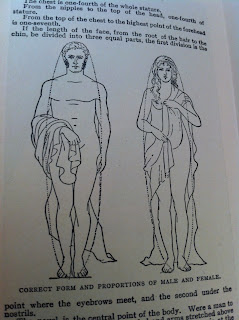 What fascinates this here girl is that this sex book does in fact use pictures.  Only...they are covered.
This particular picture discusses the Correct Form And Proportions Of Male And Female.  And goes on and on about the beauty of the body but dang them, there's no picture OF the body...

The misconceptions that are own grandparents and their parents were born into is astounding and even more so, knowing that this wasn't that long ago.  Some of these people are still walking around today.  Or should I saw hobbling around...that said, I haven't even made a dent in this book!  It's very sexist and I'm struggling not to rip pages....God do I ever feel blessed to have been born in the era I have been born in, because I would have been a slut and a whore of the worst sort, reading BAD BOOKS and having ovarian complications...

Until Next time, Much love to you and your ovaries,
Delilah Marvelle