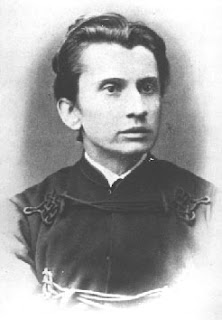 My dearest Readers,
There are many words we use today in which we don't even think about as to why we use them or where the heck they came from.  I'm going to explore that today.  "Masochism" is one of those words people use left and right to define people who in plain terms like to be treated like shit.  We know what it means, but where did the term come from?  Just as 'sadism' came from Marquis de Sade due to his works and quirks and private life gone wild, masochism found its way from a quiet gentleman named Leopold von Sacher-Masoch.

Born in 1836 in the city of Lemberg in the Kingdom of Galicia, which at the time was part of the Austrian Empire (now the Ukraine), he grew up fascinated by law and history and went on to be a professor.  Very educated, he lead what people thought was a simple, quiet life.  Until he retired from being a professor and turned his full attention to writing books.  At first, his books were respectable stories relating to cultural histories that he became known for and respected for.  He must have gotten bored.  Or rather, he must have gotten bored of hiding who he really was.

In 1869, he started publishing short stories known as The Legacy of Cain.  He abandoned completing the collection of stories, but had created one story in particular that to this day made him incredibly famous and well known.  The story was called Venus in Furs.  It explores Masoch's fetishes.  Black furs, black silk, knives, whips and confessions of a 'supersensual man' who wanted to be a slave to a woman.  The word "donkey" defined who he was.  He was waiting to be ridden by his master.  It isn't merely about physical submission but mental submission.

In reading Venus in Furs, you might expect 50 Shades of Grey.  Not so.  It's a philosophical, yet romantic approach to a man fully submitting to a woman.  Quotes like "To be a slave of a woman, a beautiful woman, whom I love, whom I worship" is the premise of Venus in Furs.

Yet it's pretty obvious more than romantic philosophies line these pages.
I picked my favorite part from Venus in Furs just to demonstrate:

Today she suddenly took her hat and shawl, and I had to shopping with her.  She looked at whips, long whips with a short handle, the kind that are used on dogs.
"Are these satisfactory?" said the shopkeeper.
"No, they are much too small," replied Wanda, with a side-glance at me.  "I need a large--"
"For a bull dog, I suppose?" opined the merchant.
"Yes," she exclaimed, "of the kind that are used in Russia for intractable slaves."

Curious?  Want to read it?  I recommend you download it for free from Amazon.  It's a quick read and nothing like you'd expect.  It's historical confectionery masochism.  And it's hard to believe the word came from this odd little man.

Needless to say, in Leopold's private life, he was, in fact, living out his fantasies and festishes.  He signed a contract with his mistress known as "Baroness" Fanny which made him a slave to her for six full months.  He was at her cruel bidding of each hour of each day.  His only request was that she had to wear furs (which he bought for her).  Even better?  Whenever he traveled with his "mistress," he wore servant's clothing and took on a common name.  It was "Gregor" this and "Gregor" that.  Believe it or not, Leopold eventually married.  Not his "mistress" but a woman who had no idea what the hell she was getting into.  He made her live out all of the fantasies she wasn't into.  All the poor man wanted was his wife to be his master.  But I'm certain it was more work than she had anticipated.  He eventually got bored of her, given she wasn't cooperating, and divorced her.

Believe it or not, the term 'masochism' came to be used when Leopold was still alive, back in 1886, by a psychiatrist.  Apparently, Leopold wasn't pleased but given his character, I'm certain the humiliation was one he secretly savored.  His so-called private life became further exposed when his ex-wife decided to write a memoir about their lives together.  They were detailed and to the point.  It grounded the term 'masochism' in the minds of everyone permanently.  Think on that the next time you use the term 'masochist.'  Think of poor Leopold being sized up by his ex-wife and a psychiatrist...

Until next time,
Delilah Marvelle