The History of Contraceptives 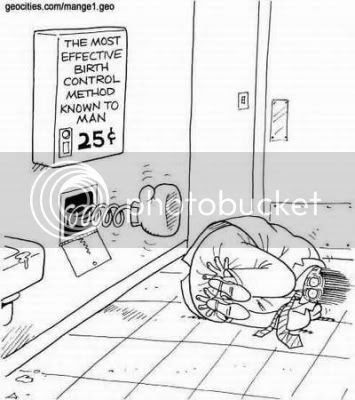 My dearest Readers,
Throughout history, women have scrounged for ways to unearth the greatest skill no man seemed to be able to understand: effective contraception. Looking back on history, men's only real effective form of contraception in history (prior to the 1900's) was what was known as onanism. Meaning spilling sperm outside the womb. Big freakin whoo-hoo, I say. It was believed by many throughout history that a man would suffer from hearing, memory and eyesight loss and even consumption if he DID NOT spill their seed into the womb.

Needless to say, it became obvious to our fellow women that men really weren't all that reliable when it came to preventing pregnancy. It was up to her and her alone to prevent that pregnancy. Times haven't really changed ALL that much...have they? So let us quickly delve into the idea of contraception.
Egyptians were pretty savvy and were the first (at least documented) to create the idea of contraception. They realized that if something were "inserted" thus blocking the inner area of interest, pregnancy could be avoided. What exactly did they use to create this blockade? Sun dried crocodile dung smeared with honey. It was inserted into the vagina and poof! You had a diaphragm. And freakin yeast infections, no doubt. *Shuddering*

It became pretty clear to Greeks that abstaining during certain periods of time when a woman was most fertile was important to the prevention of pregnancy. Only...Greeks believed women were most fertile during menstruation itself. Hence the tradition of not engaging a woman during menstruation (and not just because it's messy and gross). Doctors were unable to provide women with real effective and "safe" days until the 1930's.

Constant misunderstanding of the female body and how it worked up until the 1930's meant women had to rely on potions and treatments and whatever the hell they could get their hands on. Trial and error allowed them to determine what was passed on from generation to generation and what was a bad idea. Men weren't all that helpful, either. Male Greeks believed drinking the water blacksmiths used to dip their hot iron tools into was a form of birth control. What moron actually thought this was effective most likely never drank the water himself. Gives a whole new meaning to the term "Must be something in the water."

Throughout history, other methods of contraception included mixing in urine with food or drinks, mercury, and arsenic. All to be ingested and were praised as being very effective. It was. It made a woman sterile and caused brain damage. Only they didn't know that. They just knew it worked. Other methods included "dislodging" the sperm. Greeks had methods of having a woman jump backwards several times. The whole not letting the sperm spatter the womb simply wasn't all that popular. Which again left a female to do all the jumping. Backwards.

Prostitutes since the 1500's were known to use methods of douches to "clean out" the sperm.
But the whole barrier idea seemed to be the most popular and most used. Soft wool soaked in lemon juice and/or vinegar would be lodged up into the area. Beeswax was also used, rolled and shaped to fit into the area. Lemons sliced in half and inserted was also considered effective, due to the acidity that killed the sperm and the lemon itself that created a barrier from the sperm. Believe it or not, thimbles and wooden "objects" were also crammed up in there, though its popularity died quick. Can you guess why? If you can't, I dare you try it and see if you last during a session.

Other methods throughout history include women tying weasel testicles to their legs during sex. Attractive? No. Effective? No. So why did they try it? Because some moron told them it worked. Think of the diet fads of today. People are willing to try anything. The closed buds of opiums were also used as diaphragms. Heaven only knows if a female was even conscious during intercourse because of side effects, but hey. It wasn't about her pleasure anyway, was it?

Since the middle ages, herbal preparations were created to "bring on" a woman's menses. Meaning, almost like a morning after pill. Only it wasn't usually taken the morning after, but during "the scare." Plants like Calamint, Cypress, Agrimony, Horehound, Juniper, Rue and Safe were passed on for generations. Women would create special brews (teas, in theory) with these plants and drink the mixture to bring on their menses.

The first published book to assist in such things was CULPEPER'S COMPLETE HERBAL. It was published in the 1600's and recommended using eringo, sea holly, black hellebore and royalpenny. If boiled and then drank, it brought on menses. Which meant, it was a form of self-abortion. In cases where such remedies were not effective, there were brutal backstreet abortionists, which the kitchen knife technique which scarred the womb and not known to them, prevented future pregnancies (if it didn't kill them). Inducing a miscarriage by herbal or any other mean, however, because a statutory offence for the first time in history in England, in 1803. This law was ironically passed by men who also believed spilling outside the womb was lethal to a man's health.

While condoms had been around since the early 1600's, it wasn't used for contraception but prevention of disease. Casanova was the first to use condoms for contraception. Condoms became more popular for the use of contraception with Mr. Goodyear, who in the 1860's created the "rubber" condom, crushing the whole intestine made condom with his invention. And yes, it's the same Goodyear who made tires. Women have come a long way with regard to contraception, but one thing hasn't changed since the beginning of time. Almost 95% of birth control is imposed on the female, not the male. There are no "birth control pills" for men. No IUDs for their cocks. No special drinks or potions. They either get their tubes snipped, pull out at the right time or use a condom. And most men complain about the inconvenience of all of the above. It's enough to make a woman think "Hmmm." And get pissed.
Until next time.
Cheers and much love,
Delilah Marvelle
Posted by Delilah Marvelle at 5:03 PM 8 comments:
Newer Posts Older Posts Home
Subscribe to: Posts (Atom)