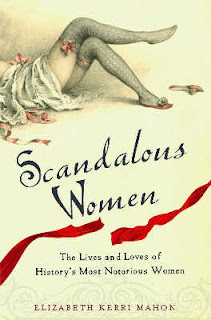 My dearest Readers,
I have an amazing special guest post from my dear friend and writer and researcher extraordinaire, Elizabeth Kerri Mahon. It's ever so fitting to feature her book. Read and post a comment for your chance to win a signed copy of her incredible book, SCANDALOUS WOMEN. Be sure to post your email address. This giveaway is only open to U.S. residents. And without further ado....let Elizabeth strut her stuff.

Well Behaved Women Don't Make History" Laurel Thatcher Ullrich
From the moment I first read that quote, I knew that I wanted to write about those women who weren't so well-behaved, the stories of the brave and ballsy women who made waves since the dawn of man. It's the sinners that we remember far more than the saints of this world! Those are the stories that drew me to writing Scandalous Women. Outrageous women like Barbara Castlemaine, Duchess of Cleveland who once threatened to dash out the brains of her child unless her lover Charles II of England acknowledged him. The dramatic fire of Lola Montez as she danced the Spider Dance that lured men like Franz Liszt, Alexandre Dumas pere and King Ludwig of Bavaria into her web. I wanted the reader to see these women not just as icons or as symbols but as human beings, warts and all.
Writing this book was a labor of love but it was tough narrowing the book down to just 35 women. So many Scandalous Women, so little time! I wanted to include a wide range of women, some that readers would know, but I also wanted to include some forgotten women like Carry Nation and Anna Leonowens. Even though I adore all the women that I wrote about, there were some of course that I loved more than others. I hate to play favorites but I can't help myself.
Eleanor of Aquitaine - Who hasn't watched The Lion in Winter numerous times? I know I have. Wife to two kings and mother of three, Eleanor of Aquitaine was the most powerful woman of her time. As the heir to Aquitaine she ruled over an area half the size of modern France. Complex and boldly original, she broke the mold for women, and lived life on her own terms. Not content to stay at home while the men waged war, she joined her first husband Louis VII of France on Crusade. During her difficult and troubled marriage to Henry II of England, joined her sons in rebellion, spending eleven years imprisoned for her daring. Even in her eighties, she continued to be a force, holding England strong for Richard the Lionheart, while he away was on Crusade, before finally retiring at last to a convent. During her lifetime she was the subject of vile rumors, that she rode barebreasted like an Amazon while on crusade, slept with her uncle, murdered Henry II's mistress Rosamund Clifford, ignoring her achievements as Duchess of Aquitaine. Isn't that always the way?
Anne Boleyn - My favorite of all of Henry VIII's wives, Anne has fascinated me for years. Sultry and tempestuous, Anne caused a sensation when she returned to England from France, cutting a swathe through the gallants at court. Fashion forward, she not only introduced the adorable French hood, but also made brunettes the rage. The original Rules girl, she kept the King of England him at arms length until he made her Queen. Where did she get the chutzpah? Not only did he divorce his wife, but he broke with the church of Rome, creating the Church of England, all for her tawny hand. Her greatest legacy, her daughter Elizabeth, arguably England's greatest Queen.
Jane Digby - called "one of the most remarkable women of the nineteenth century', Jane married at the tender age of seventeen to the much older Lord Ellenborough, but within a few years she left him for an Austrian prince resulting in one of England's most scandalous divorces. Subsequently she fell in love with a young Greek count who then fought a duel for her. In middle-age but still beautiful, after vowing to renounce men, she met and married the love of her life, a Bedouin nobleman, who was twenty years her junior. Today we would call Jane a serial monogamist but in the Regency and Victorian era, they had some not so nice names for her. I prefer to think of her as a passionate nomad, searching for her one true love.
This is just a sneak peek of some of the women that you can find along with a host of other rule-breakers in SCANDALOUS WOMEN.
Posted by Delilah Marvelle at 1:00 AM 10 comments:
Newer Posts Older Posts Home
Subscribe to: Posts (Atom)