The Art of Flagellation 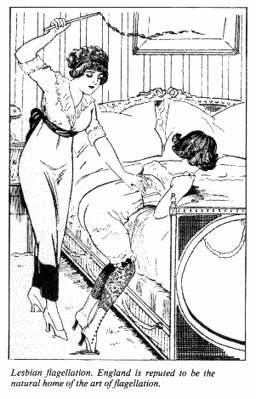 My dearest Reader,
Happy New Year! Seeing as we have a whole new year of delving into devious content, I thought we would start this glorious new year off with a bang. Or rather, a whip. When it comes to flagellation, much comes to mind to us modern beings. Religious rituals. Punishment. Pain. Lots of pain... Or just plain kinky sex involving a riding crop.

You had best believe I'm here to discuss the last one. Plain kinky sex. Now flagellation itself has been around for a long, long time. Since man pieced together leather and added little decorations to the end of it. But the kinky, sexual aspect doesn't actually make a notable historic appearance until about the Renaissance. And most of it was noted by historians as being found in paintings. That oddly enough, the people who were getting whipped in those paintings, appeared to not be in pain, but rather....pleasure. I'm certain you've seen one of those paintings yourself and thought…hm.

In the 1600's, however, things in literature started unexpectedly popping up. In the book THE VIRTUOSO written in 1676 by Shadwell refers to how flagellation in the English Boarding Schools which was used as punishment brought on a generation of savages who acquired quite the taste for more whip in the bedchamber in their later years, long after school was out. Hm. Think school girl WITH a whip. Other forms of literature hint at naughty Italians doing things like treating their wives and mistresses like dogs. Literally. With real collars that went on when the door to the bedchamber closed. I imagine they had sex 'doggy style.' Get it? Heh. Yeah…

So then we move full on into 1700's itself. It was without a doubt a very fascinating time in sexual history. Courtesans who always had a place in history as being BAD BAD BAD, suddenly found themselves 'fashionable' and being GOOD GOOD GOOD. They were able to rise from rags to riches with a mere spread of the legs to the right man. It was all the rage amongst aristocratic men to harbor courtesans and mistresses and flaunt them to their friends and family and do whatever they pleased as long as they had the means to financially please her. So it shouldn't come as a surprise that the 1700's gave way to different sexual art forms. Including fascination with flagellation. In 1718, the book, A Treatise on the Use of Flogging in Venereal Affairs, by John Henry Meibomius was a guide to the erotic science that discussed the belief that there are those BORN with a condition that are stimulated by the rod and can be 'worked up into a flame of lust by blows.' I'm sure people picked up copies and wanted to find out if they themselves were born with this unusual condition. Some probably found they were, whilst others found they were quite....turned off by the idea of pain.

Of course where there is a book that is being sold about such an art, there are ideas springing up from how to make money off of those kinky people (my, times haven't changed all that much, have they?). A flogging machine was patented and sold. A machine that could whip over 20 people at a time. Flogging party anyone? Sounds like fun!

The English in particular were VERY fond of flagellation. So much so that they french dubbed it as the 'English Vice' in the 1700's. Brothels were popping up in London that specialized in flagellation and many competed with each other. One brothel in particular that was popular was entirely dedicated to flagellation. That of Mrs. Berkeley's brothel. So dedicated was she to flagellation, in fact, that she created her own contraptions. One that was particularly popular was known as the Berkeley Horse. And no, it did not look like a horse. It was a padded flat surface with accommodating open areas that allowed men to 'stick' their cock through. It was used in a manner in which the costumer was stripped and placed face down on it then tilted on an angle (think of an easel in which the man is the painting being painted red...quite literally). The man would be placed with his bared ass in the air and genitals through the padded hole. It was advertised by Mrs. Berkeley that whilst a man got whipped with a birch rod by one lady from behind, another lady would be sitting beneath the angled 'horse,' sucking his cock from the other side. So he didn't have to worry about falling over from pleasure OR pain. Mrs. Berkeley's popular warehouse full of gadgets for the pleasure of pain earned her over 10,000 pounds a year, which in the 1700's was a shit full of money (pun intended...). So whilst a prostitute's arm and mouth was sore. Nothing else was. Grin. Mrs. Berkeley probably didn't have problems hiring. After all, a woman gets to whip the crap out of a man AND get paid? Now that is power.
Until next time,
Cheers and much love,
Delilah Marvelle
Posted by Delilah Marvelle at 1:40 PM 10 comments:
Newer Posts Older Posts Home
Subscribe to: Posts (Atom)