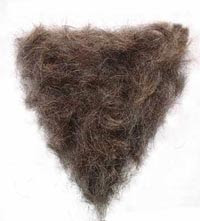 My dearest Reader,
I apologize ahead of time, but will confess that this post will most likely not go beyond a few measly paragraphs. It has nothing to do with my being lazy, but the topic itself. The ever illusive history of the merkin. What, pray tell, is a merkin? Well, it's a wig. A *pubic* wig. And they've been around for a VERY long time. The merkin itself was believed to have made its appearance about 1450, according to the Oxford Companion to the Body. I have no doubt whatsoever that it was around much longer than that obviously if there is no documented proof of it, then one cannot readily say it. While The American Heritage Dictionary of the English Language claims that the word "merkin" is a corruption of the word "malkin" (which in c.1400 meant 'mop' as well as 'lower class woman'), I am going to be a total snot and disagree based off of my own piecing together of bits of history pertaining to the merkin. Now before you snicker and wonder why the hell I would even spend any time researching a pubic wig, I assure you, I wasn't in the least bit interested in researching it. Seriously!!! It sort of...well...fell into my lap. Ehm. Bad pun, I know. But here's what I found on my own, as very little is known about the detailed history of the merkin.
The idea behind the merkin itself seems to have originated from prostitutes. And not for the kinky reasons you think. Merkins were mini wigs pieced together with goat hair, horse hair or human hair. Should I mention that most human hair for wigs of those times were taken from corpses? Nice thought. Unlike real pubic hair, the merkin could be removed, boiled or placed in an oven to kill lice and anything else living in it. Prostitutes who were forced to shave off their pubic hair due to pubic lice had to quickly cover that area up and I'm guessing that the Renaissance period, in particular, had something to do with it. People in that era found pubic baldness extremely funny, and well, a prostitute couldn't readily be seen as a dunce if she's to make money. Merkins also hid something even more sinister. Venereal disease. A good merkin would cover sores from syphilis and gonorrhea. Women who were being treated with mercury usually also suffered from pubic balding.
How were they attached? Now this, I don't know. I've tried digging that up but was unable to find any sources that would give me documented proof of how it was physically attached. I'm guessing it was tied into place and in turn made it look festive and decorative. Maybe ribbons (if the prostitute could afford them, that is).
So...getting back to me being a snot. I disagree with The American Heritage Dictionary of the English Language based of the following: It's all about connecting dots and realizing that slang changes and the use of a word can arise from a different origin than expected. According to Groses's Dictionary of the Vulgar Tongue (1795) the merkin was defined as "counterfeit hair for the monosyllable." (Monosyllable was Grose's reference to the woman's crotch, lol). Now right after his brief little definition of the merkin is an interesting addition that states, "See Bailey's Dictionary". So what did I do? I went over and looked into Bailey's Dictionary (the one published in 1675 which wasn't cleaned up in later additions) and found his definition of the Merkin. And guess what? It wasn't a pubic wig at all, but this: "A dangerous port in Cornwall called such from the many storms arising there." When I read that, I immediately thought, "Wait. What real connection does the merkin have to 'malkin' other than 'mop' and 'lower class woman?' How did they make this connection? They had no texts or documentation they used to make that connection and they even stated that as such. It's an assumption that merkin is a corruption of malkin. But here's the thing. It was noted in many texts back in the day that men who recognized a woman as wearing a merkin was dealing with a dangerous situation...meaning she was disease ridden and covering it up. And so this dangerous "port" where "storms arise" known as "Merkin" seems like a much bigger connection to the actual origin of the word merkin than "malkin." WOW. It's very possible I have stumbled upon something that has baffled scholars for decades...heh...that is if merkins were a subject of interest to great historical scholars...
Until next time,
Cheers and much love,
Delilah Marvelle
Posted by Delilah Marvelle at 11:54 PM

Now I'm picturing scholars sitting in a study with top hats and glasses sipping tea and having a heated discussion about the merkin. xD.

Great sleuthing! I think you're on to something. And what a fun post. Never heard of a merkin, but now that I have, it'll be one of those random facts I remember forever.

Ha very interesting. Atleast these girls put the pubic hair wig where it was supposed to go.. unlike the men in Begger's Benison wearing it on their head!! LOL. Eww it must have been so uncomfortable!

I just discovered what a merkin was a couple of months ago when I heard Lucy Lawless talk about them in an interview about her Spartacus show.

I totally agree with your hypothesis Delilah!

and I'm curious: How DID the merkin fall into your lap?

I'm so glad I remembered the month had turned. Yet, another interesting tidbit in our world. Yes, I must agree I think you have hit the nail on the head. Now remember your history the name Cornwall leaps out at me. I must go read about mythical Arthur Mythical Merlin disguised his father so he might bed the Lady Cornwall??? thus Arthur .. So it does conceal a "mystery" involving "mischief". Yep you are on to something.

Less than two months and counting the days to the release of Prelude to Scandal. thanks for timing Once Upon a Scandal and The Perfect Scandal coming in January, February and March to brighten my life during the dregs of the ice, snow and shoveling of winter!

So bizarre and interesting! (And really kinda nasty, if you think about it. LOL)

Have to wonder tho - if the phrase "grimalkin" had anything to do with some of our more recent terminology for female parts. (Since a grimalkin is slang for "an old or evil-looking female cat," according to Wikipedia, anyway. Malkin ==> P*ssy?

Maybe I'm reaching a little to far tho.

As always Delilah--a fascinating post! I think you're on to something there... it seems they always talked in riddles back in the day when discussing sex etc... so it is a fair assumption to imagine the port as a woman's hoohah, and the storms being diseases, and perhaps Cornwall was rife with sluts :)

My dearest Sandy,
Seriously, they need to sit around, sip tea and talk about these things. Otherwise, who will? LOL

My dearest Yvonne,
Yes, I have to say I connect unrelated things ALLLL the time, lol. I see the dirty side of everything. Which can be rather annoying to many but fortunately not you :p

My dearest Carolynn,
I'm glad I was able to introduce you and the Merkin, lol. Yet one of many more fabulously icky things in history.

My dearest Linda,
Snort. Omgosh, that was CLASSIC. Yes, these girls certainly were smarter than our Benison boys.

My dearest Jane,
How very awesome you were lucky enough to stumble upon the merkin earlier. Yay for Lucy Lawless!

My dearest Amalia,
Haha...*HOW* did the merkin fall into my lap? I was reading about Renaissance prostitutes and it flippantly mentioned the merkin but gave me no detail as to what it was. Naturally, my curiosity got the best of me, I started digging into history and the rest is well...history!

My dearest Nancy,
Fascinating. I think you're on to something yourself. Between the two of us...I think we shall be known as historical sex scholars, lol.

My dearest Jeanne,
Thank you so much for posting! And for being so enthusiastic about my upcoming Scandal series. Holy cow, you're making me freak out just thinking about it, lol.

My dearest Allison,
Heh. It's *really* nasty. And that's part of the fun of uncovering this stuff that has been buried because it's nasty. And I have to say...I think you're really onto something with grimalkin. I find that a lot of slang and history having to do with sex has been more or less "erased" or "cleaned." Which is annoying. Because you can't really get a true sense of what people were really like. Although I guess that's where our own imaginations come in.

My dearest Eliza,
Hahaha, I looooove that. Cornwall was riddled with sluts and there you have it. No offence to all the women living in Cornwall right now, of course...Thanks for posting!!! Muah!

Actually, I tend to think the Malkin phrasing makes a ton of sense. It relates to both low class women and mops.

One of the uses that I have read repeatedly of the merkin has been to act as a mop after each 'client' is through. Since we are talking prostitutes, they may not have always have the ability to be using an actual bed for business with access to a toilet or wash stand.

Just throwing in another two cents.

My dearest Miss Spinster,
Another fabulous angle to throw at it, yes! I love it and you're right. That is what I find so fascinating about historical observations and piecing it together, every angle brings a different take and a great way of looking at it. Thank you so much for throwing your two cents my way and posting. Personally, I think it was worth a good hundred cents, lol.